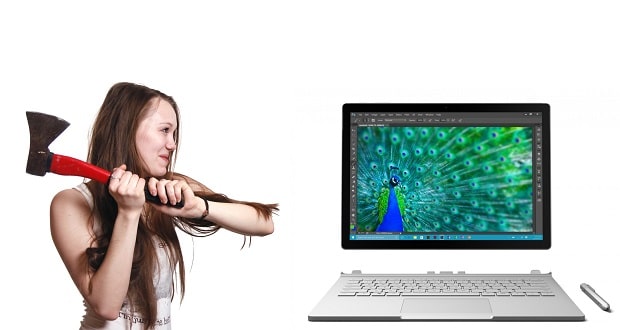 It feels like 2013 all over again. Microsoft has released a new Surface and some of the mainstream tech media has jumped all over them. This time, it’s because the Surface Pro 4 and Surface Books have had a few problems out of the gate.

It’s disheartening to buy a $2000 to $2500 device and have problems but, no matter what companies do or how much they try to make it perfect, it sometimes happens. There are several factors that could have contributed to these problems; the newness of the Skylake processors and drivers, a batch of bad parts, rushed production schedules, communication issues within Microsoft, the list goes on…

Could some of them have been addressed better? Sure.

Is complaining about it and calling the Surface Book a “paperweight” helping? No, of course not. In fact, not only is it not helping, it’s NOT true. It does, however, make for “click-bait” headlines to draw traffic which, unfortunately, is all that matters sometimes.

So, my word of advise to all of you that have ordered the new devices, like me, is: DON’T PANIC!

Surface Pro 4 and Surface Book Problems: What Can I Do About Them?

So, instead of adding to the complaining, I thought it would be better to outline the issues and give you some possible workarounds to help you out until Microsoft gets the problems resolved. Hopefully, some of the workarounds I have listed below will alleviate the most common issues you may be experiencing with your new Surface.

This problem is characterized by changes to the on-screen color “temperature” when using a web browser. It looks like the page is quickly becoming more pink or purple for a split-second then back to normal, then it becomes a little more blue or yellow, etc.

Here’s a short video showing what this looks like:

The problem persists if you use an external monitor; so, it’s not a screen hardware issue. Also, since the colors start out correct, the graphics hardware is probably not source of the problem.

To me, this looks like a classic driver issue. While that means there’s probably nothing you can do as a workaround (at least we haven’t found anything and we had a direct line to the Microsoft Engineering department trying to help), the folks over at Microsoft will fix it with a patch in the near future.

So, for this one, all you can do is be patient.

This problem is different. Instead of just an annoying shift in color temperature, the screen on the Surface may cut out a few seconds then come back. These screen cutouts can happen at any time but seem to happen most frequently when there’s a lot of activity on screen. Alternatively, it may flicker constantly. You can see what this looks like below:

Some folks have said that Hyper-V, which gets enabled if you install Visual Studio, is the source of this problem. However, Hyper-V is not on by default, so most people would rarely experience this problem. Since, the problem is somewhat wide-spread, as Joanna saw on her SP4, Hyper-V is unlikely to be the reason for it.

I, also, don’t think it’s an issue with the much-touted, NVIDIA dGPU or drivers because the problem occurs with the Surface Pro 4 (which doesn’t have a dGPU option) and it will happen with Surface Books lacking a dGPU.

Anyway, here are a couple of workarounds that have helped others:

Hopefully, one of these will do the trick for you too.

Some folks have been seeing intermittent lockups and even Blue Screens of Death (BSOD). The prevailing theory is that there was a bad batch of processors from Intel causing the majority of these problems because replacing the Surface seems to address them. I tend to agree. So, if your new SP4 or Surface Book is locking up or crashing, you should contact Microsoft support or visit your local Microsoft Store to arrange a replacement.

I know it’s a pain but bad hardware is bad hardware. Hoping it will get better won’t help.

One of the first Surface Book problems we encountered was the rear facing camera failing to take still photographs. This is the problem that actually prompted us to reach out to Microsoft. Fortunately, Microsoft quickly addressed the issue so, if you’re having this problem, Update your Camera App to version 2015.1078.40 and it should be fixed for you.

This problem seems to occur when you have a Surface Book with a dGPU and you press the Surface Detach button or icon to separate the clipboard from the keyboard. When it happens, instead of getting a message saying it’s “Ready to Detach” you get a message like the one below: 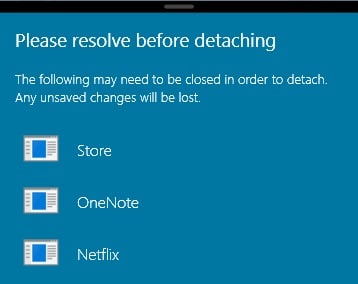 My current theory on this problem is that the dGPU in the keyboard section (if present) gets tasked to do something for the applications listed and is preventing the undocking from occurring. The way most people have been dealing with this is to restart their Surface. It works but is kind of a pain.

I came up with a different workaround that seems to work well for me but may impact graphic performance a bit. It works because, by default, your Surface Book will try to automatically select which graphics processor to use.

However, you can tell it to explicitly use the integrated processor (on board the clipboard section), so it won’t try to use the dGPU in the keyboard (and possibly cause the undocking problem). If it doesn’t use the dGPU, it won’t freak out when you try to undock the clipboard. Makes sense, right? 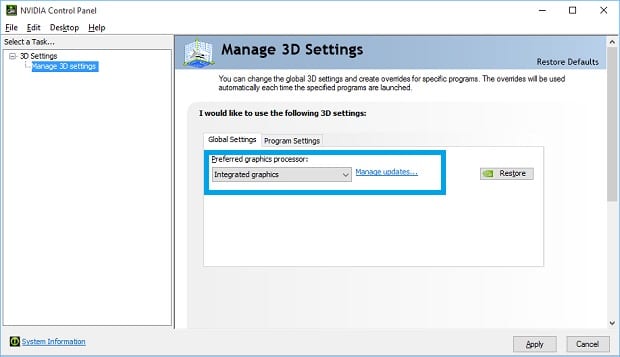 If you’re comfortable doing it, you can go under the Program Settings tab and set the graphics processor for individual applications, if you know you need the dGPU for them but want to cut down on the undocking issues.

After I explicitly told my Surface Book to use the Integrated Graphics Controller, I haven’t had a single instance of the “Can’t Detach Dock” problem.

Finally, we get to a problem where people have reported their new Surface Pro 4 or Surface Book will drain its battery even though it’s supposed to be sleeping. I’ve actually seen this problem with the Surface line in the past and it’s more likely a Windows 10 issue than a SP4 or Surface Book hardware problem.

Take a look at the following article for some guidance that might help: Surface Won’t Stay Asleep After W10 Upgrade

Like I said before, it’s disheartening to have issues with a brand-new device (especially an expensive one) but stay positive and have a little patience. Microsoft will work these things out, as any other successful company, they always do.

Your reward will be a really powerful and cool tablet or laptop that’s the envy of your friends.