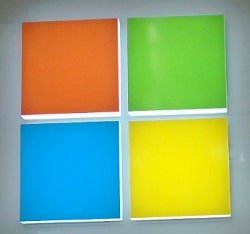 OK, I know that you have probably figured out by now that I like the Microsoft Retail stores. We’ve had one within an hour drive to our last location for the past few years and I have gotten nothing but fantastic service from them, in fact, once I was mistaken for an employee, see post Microsoft Retail Store Field Trip: How I Did a Sheldon Impression.

Today I have to share my experience with yet another Microsoft Retail store, this one in Jacksonville FL – no I’m not collecting visits to their stores – ha ha – I’m simply going in any time I have a problem.

So, we’ve been on the road for the past week, en route to Puerto Rico, see my post Surface 2 (more on that soon), so we looked up the nearest Microsoft store to get see if I can get a replacement – it turned out that there was one right down the street from our hotel in Jacksonville and we went to see what they could do for us.

We brought my baby Surface (aka Surface 2) and Tim’s Surface Pro 2(SP2), the former because it was having a problem and the latter because the outside case was pretty beat up – Tim treats his devices pretty roughly, it literally looked like his SP2 had gone through an Army camp but otherwise, it was not having any problems.

As always, we were greeted with friendly smiles as soon as we walked into the store and were set up with appointments (two separate ones because we had two Surfaces) to see the technicians. Our total wait was less than 5 minutes and we were lead in the back to see the techs.

After only a few minutes of conversation, the tech agreed that I needed a new Surface 2. Unfortunately, they did not have an Surface 2 4G in stock, so I could not get a replacement. They offered me a Surface 2 but that would be a down-grade, so I declined. They called two other retail stores (one in Tampa and one in San Juan – where we’re heading) but they also did not have any Surface 2 4Gs in stock. So, they offered to send the device back to Microsoft for me for a replacement. I declined again because we are still on the road and won’t get to San Juan until next week. I chose to deal with it when we get there. Overall, they couldn’t fix my problem but they were very helpful and I got to chat with both the tech and the sales floor person about San Juan – very friendly young people.

Juicy Tip: We were told that the reason that they didn’t have a Surface 2 4G in stock was because Microsoft has stopped making them all together. They didn’t know what was coming but told us that something new is definitely brewing – a Surface Mini perhaps?

Tim had far more luck with his Surface Pro 2 replacement. He got a brand new SP2 because they had them in inventory. It took no more than 20 minutes total and we were on the way with a new device in hand. This was totally consistent with our previous experience of replacing an original Surface RT in Michigan – easy and painless, they just gave us a new device. For our convenience the replacement devices had already had the Windows 8.1 update installed – bonus! So, all we had to do is to install the minor updates – that’s a huge time saver when you’re on the road!

As for my Surface 2 4G, Tim is working on a post right now on how to check what’s eating your battery life – that should be available to  you soon. But, my plan now is to take it to the Microsoft Retail store in San Juan, Puerto Rico and have them mail it back to Microsoft for me for a replacement.

With the excellent service I’ve been getting from these guys, I don’t expect my experience in San Juan to be any different than any of the other Microsoft Retail stores.

If I sound partial, that’s because I am. I am very brand loyal and as long as I am treated well, I will be coming back.

You may also like our posts Surface Accessories Buying Guide and Surface Pro 3 Hits The Skies.