Microsoft certainly muddied the waters a bit with the surprise announcement of the Surface 3 last week.

People were already having problems trying to decide between getting a SP3 now or waiting until the SP4 is available and the folks who choose to get a SP3 are having problems deciding between the i3, i5, and i7 models!

So now, Microsoft throws in an relatively inexpensive tablet running full-blown Windows 8.1 into the mix? It’s almost like they want everyone to be suffering from change fatigue.

I’m intentionally not doing a “versus post” since it implies one is better than the other. In reality, both devices are equally good for different types of users. You just need to have the information available to you, in a format you can understand, to choose the one that’s right for you. 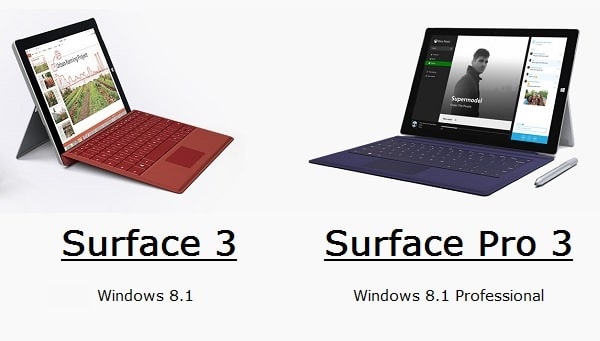 Both the Surface 3 and Surface Pro 3 run the full-blown versions of Windows 8.1 (no more RT) and both should easily upgrade to Windows 10 when it is released later this year but, they’re not the exact same version.

So, since the operating systems are (practically) identical, there’s nothing to differentiate the two devices. 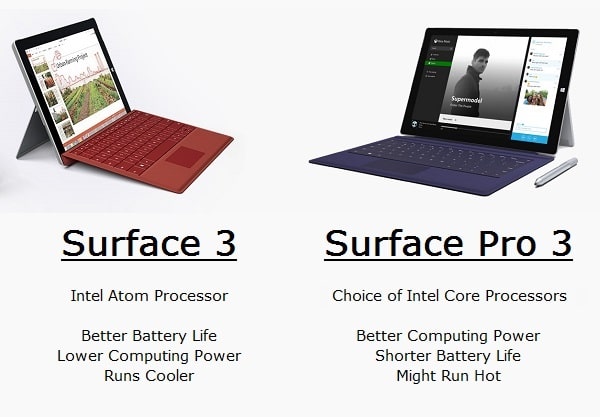 The Surface Pro 3 has a choice of 4th generation (Haswell) Intel Core Processors (i3, i5, i7).

The Surface 3‘s Atom processor is a lower power CPU with excellent power management so, a Surface 3 should have good battery life but, it will be slow if you are trying to do processor-intensive tasks like rendering images or playing games. 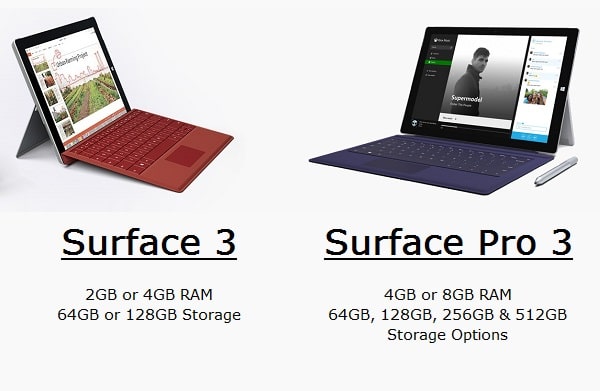 The Surface Pro 3 offers either 4GB  or 8GB or memory with storage ranging from 64GB all the way up to 512GB depending on the processor you choose.

In general, the more memory (RAM) you have, the faster your computer will run. Storage, of course, dictates how many files you can store locally. 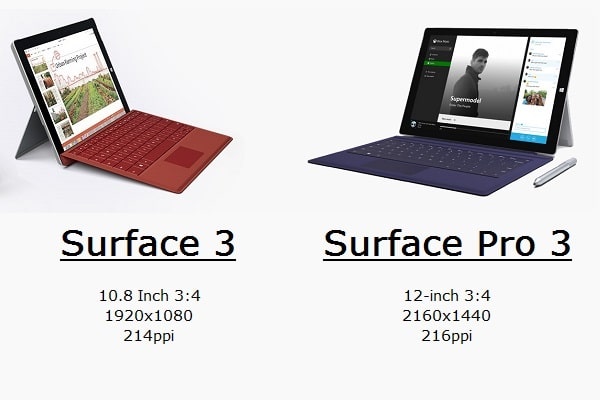 On the surface (pun intended), it sounds like the SP3 has a much higher resolution display, however, because of the difference in screen size, the actually resolution is almost identical. The only difference is size and shape. 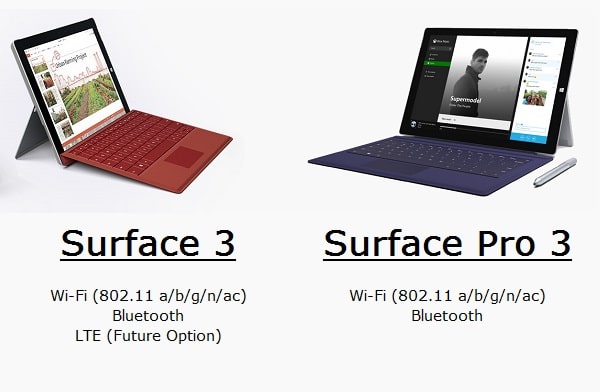 Both the Surface 3 and Surface Pro 3 offer the ability to connect to WiFi and Bluetooth (as does just about everything nowadays) but the Surface 3 will be offering an LTE option in the future (like the Surface 2 LTE model). Unfortunately, that option might not be available at release.

But it does mean that (once available) the Surface 3 LTE model will be able to connect to the internet pretty much anywhere you go (so long as you can get a signal). It makes the Surface 3 a great choice if you are a road warrior and need to be constantly connected. 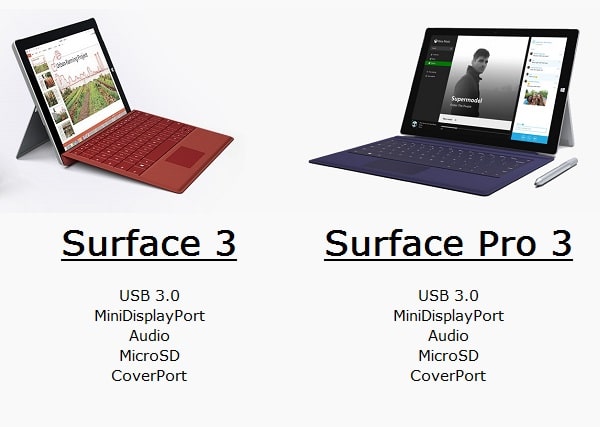 Except for the power connectors, the ports on both devices are identical. They each offer a single USB 3.0 port, MicroSD slot, MiniDisplayPort connector and audio jack.

The power connector on the Surface 3, however, holds an interesting feature. More on that in the next section.

In previous versions of the Surface Line (Surface RT, Surface 2) the display out was a MicroHDMI port. 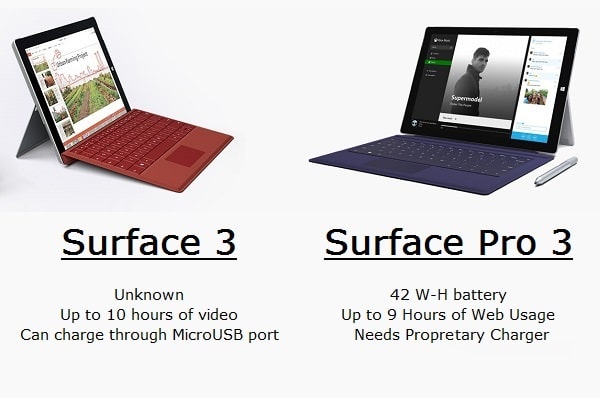 The Surface Pro 3 has a magnetically connected proprietary connector. If you don’t have a charger specifically for it, you won’t be able to charge your device.

The Surface 3, on the other hand, has a microUSB port for charging. This means that you can (at least in theory) use your Kindle, Nokia, Camera, phone, etc. chargers to charge up your Surface 3.

In addition to serving as the charging port, it is also a full microUSB port and you can connect devices to it! So, in effect, the Surface 3 has 2 USB ports built in.

The lack of charger options is something users have been complaining about with the Surface tablets for a while now, I’m glad Microsoft decided to do something to address it. 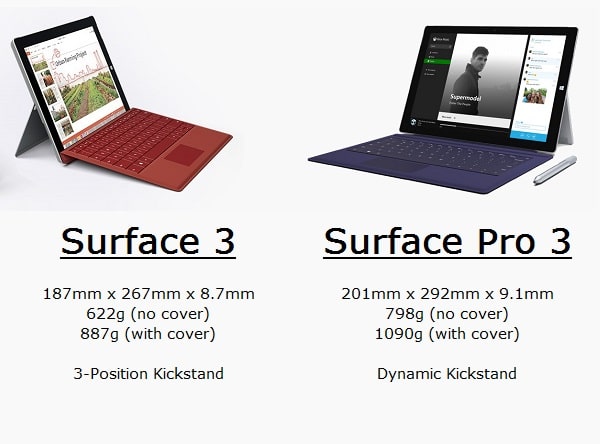 This means that the Surface 3 is more portable as it will fit into smaller bags but, really, it’s not like the Surface Pro 3 is that hard to carry.

With the Surface 3, you have to go with one of three choices and make it work. 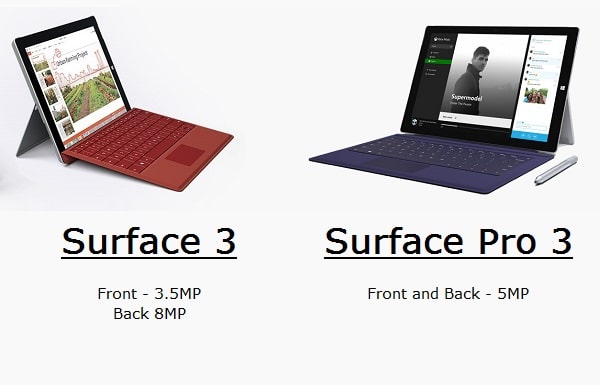 The Surface Pro 3 has taken a bit of a beating over the quality of the fixed-focus 5MP cameras on both the front and the back.

To address this, Microsoft has included an 8MP camera on the back of the Surface 3. Assuming it doesn’t have the same focus issues the SP3 does, it should be a noticeable improvement (but only a 3.5MP camera on the front). However, we won’t know for sure until we can test it.

Since the front camera is (usually) used for Skyping or other similar teleconferencing activities, it might not be a problem but if you want high quality pictures from the front camera, you may be disappointed. 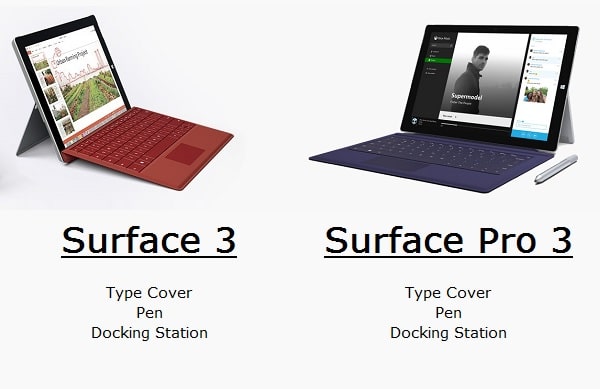 Both the Surface 3 and Surface Pro 3 offer pen support (yay!!) along with keyboard covers. Microsoft is also offering docking stations for both models; so, assuming one fits your needs, you can easily use either of them as a desktop replacement.

Of course, you don’t have to get one. 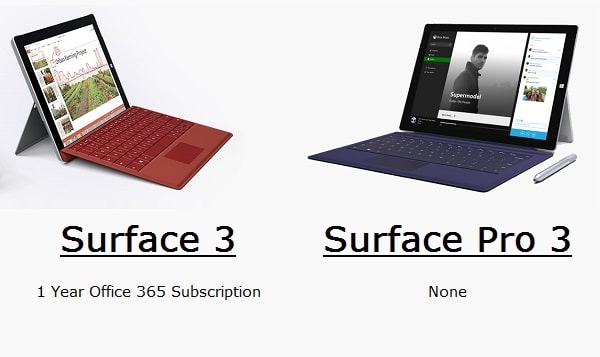 Microsoft is including a one-year subscription of Microsoft Office 365 with the Surface 3. With the Surface Pro 3, it’s an extra cost (more than cancels out the cost of the pen).

Unfortunately, after the first year, it’s a wash since you would need to start paying for Office 365 to continue using it. 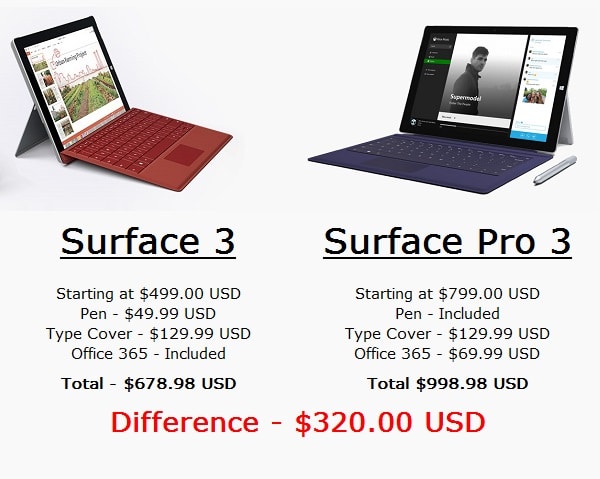 The large variety of options for the Surface 3 and Surface Pro 3.

To ensure a fair comparison, I included the costs for the tablet, pen, and Office 365 Personal subscription (1 year) for each.

When all is said and done, you’re looking at around a $320.00 USD difference in favor of the Surface 3. Remember, that’s in comparison to the lowest-end Surface Pro 3 (i3/64GB), if you are looking at one of the i5 or i7 SP3 models, the gap widens considerably.

As I said at the beginning, this article isn’t intended to say that the Surface 3 or Surface Pro 3 is better overall. It’s intended to give you information to help you decide which model is better for you.

Personally, I don’t think the Surface 3 will replace my Surface Pro 3 but I know we’ll get one since it is awesome for web surfing, reading email, and with the LTE option, excellent for “on-the-road” use.

Hopefully, the information above can help you make that choice in an informed manner.