Microsoft has released a second batch of firmware for the Surface Pro 4 and Surface Book this month. The update started hitting SP4s  and Surface Books yesterday and is listed as “System Firmware Update – 11/18/2015” in Update History.

If you haven’t been prompted to install this second batch of November updates for Surface devices, it will happen soon because Microsoft rolls out updates in waves. Just be aware that it takes a bit of time to install and includes the following fixes for the SP4 and Surface Book:

Unfortunately, after installing the updates, there have been reports of problems with Windows Hello not being able to turn on the camera. Some people resolved the issue by doing a graceful restart (via Start> Power> Restart) but the problem seemed to persist for others.

So, if you’re having camera issues after installing the new November updates for Surface Pro 4’s and Surface Books, try a graceful restart. If that doesn’t work, you can also try to rerun the Windows Hello setup routine.

If that still doesn’t solve the problem, then you can uninstall the update by going into Control Panel > Programs > Programs and Features > Installed Updates. 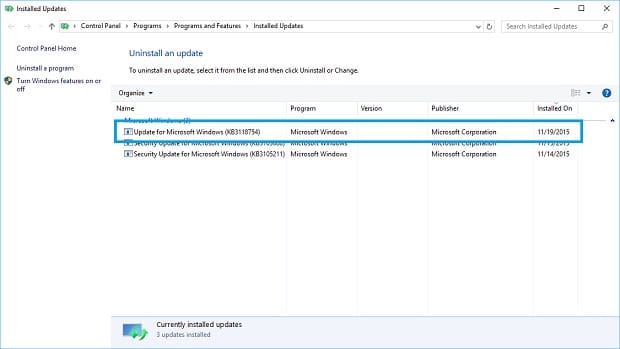 Hopefully, though, those that reported the problems were just unlucky and you won’t have any problems at all with the new updates.