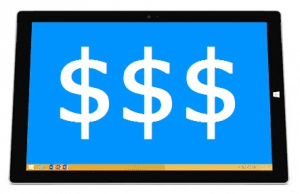 Tip of the Week: get cash for your stuff!

Yesterday, one of my colleagues walked into my office sporting his new Surface Pro 3 and said:

I almost fell off my chair! What?! That’s awesome!

Of course, he didn’t really know many details, he said that he simply waltzed into a Microsoft retail store and they offered him that kind of money for his old device….Whoa!!!

So, I set off to do some digging. It turns out that what he actually got was a trade-in under the Microsoft “recycling” program, called Surface Pro 3. It’s essentially a trade-in program but if your device is not worth any money, they will recycle it for you for free.

I’ve seen info on the program in the past but yesterday I was blown away by my colleague’s declaration – I had no idea one could get that much money on a trade-in.

I mean over $400 for the first gen Surface Pro!!! Now that’s a really good deal.

I confirmed that this, indeed, is an excellent deal when I went on eBay to look at what Surface Pros are listed for – it’s more like the $300-350 range and if you figure in having to pay listing fees and PayPal fees, you will likely end up with no more than $300.

So, if you have a Microsoft retail store nearby and are planning on purchasing a new Surface, it’s worth a trip to see what you can get for your old electronics. I am sure that the condition of the device and included accessories determine the actual value of each trade-in, but hey, money is money. Just sayin’

Under the Recycle for Rewards Program, you can recycle the following:

Check out the full details on the program from directly from Microsoft.


I also contacted Microsoft to see if this program will “stack” with some of the other discounts that Microsoft is offering before the school starts. I was told that it will, as long as one goes through the retail store. They recommended that I contact the store directly and talk to them about the discount stacking – Awesome!

So, there you have it. I’m just passing the info on. Enjoy! and happy shopping.