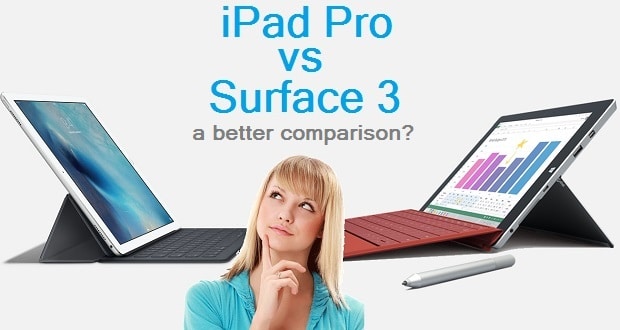 A lot of folks – including yours truly – started off by comparing the iPad Pro to the Surface Pro 3.

Personally, I blame the Apple marketing folks; they used the same “Pro” name, claimed it was more powerful than 75% of laptops sold last year, they included a keyboard and pen… err…. pencil, and they even set the price point to be in the same range as the Surface Pro 3.

But, let’s back up a minute and talk about another, more apt comparison; iPad Pro vs. Surface 3.

This comparison might be more valid because, after folks started digging into it, it looks like the iPad Pro isn’t really a “pro” device as it doesn’t run a full blown “computer OS” like Surface tablets do. As such, it is arguably just a tablet and not a hybrid tablet/laptop.

While the Surface 3 does run a full “computer OS”, it is much more tablet-like in it’s technical specifications, so, I think it is a better comparison to the iPad Pro than the Surface Pro 3.

iPad Pro vs Surface 3: The Comparison

Let’s start off by comparing some basic aspects of the iPad Pro and Surface 3. This is not intended to be an all-inclusive technical comparison but it does represent (what I believe) to be aspects of both devices most people care about. Below is a summary table outlining the aspects compared in the article:

Now, let’s dive more deeply into each of the above aspects…

First, in an effort to compare apples to apples (no pun), let’s compare the 128GB, LTE-capable the price of both tablets including a pen/pencil and keyboard.

The 128GB Surface 3 LTE with a Surface Pen and Type Cover comes in at about $880 USD, in contrast, the 128GB iPad Pro LTE with Apple Pencil and Smart Keyboard, you’re pushing $1340 USD. Numbers don’t lie, if you’re on a budget, get a Surface 3.

If you go for just the cheapest option for both platforms, the 64GB Surface 3 with no pen or keyboard is just $499 USD versus $799 USD for the 32GB iPad Pro. Talk about the infamous “Apple Tax”!!

Apple has always created good displays and the iPad Pro looks like it will be no exception. With a 12.9-inch 2732 x 2048 Retina display and capable of 720p HD video playback. By contrast, the Surface 3 has a 10.8-inch display with a resolution of 1920 x 1290. If you do the math, the iPad screen offers 5.6MP while the Surface 3 offers just 2.5MP. So, as you might expect, the screen on the iPad Pro is probably superior to the Surface 3.

Both touchscreens support up to 10 simultaneous points of touch. So, in that aspect at least, they are the same.

Apple claims that the A9X processor is 2.5x more powerful than the previous generation and, according to some newly-leaked benchmarks, it looks like they are right. 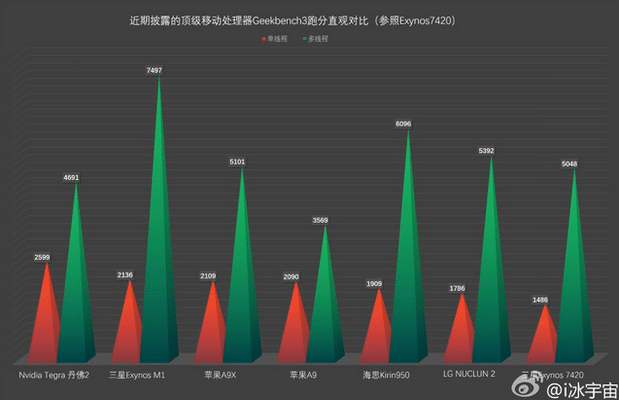 In fact, assuming the leak is accurate, the A9X is more powerful (per Geekbench scores) than the Intel i3 processor. I know its a bit off topic but in case you’re wondering about how it stacks up against the Surface Pro 3 processors:

I say “around” because I’m pulling my data for the Surface 3 and Surface Pro 3 models from the Geekbench Browser and there is some (normal) variation in the results. I also realize that the results for the A9X probably represent the best of several runs with everything being done to optimize the test scores (as many chip-makers do exactly that in such cases); so, I don’t feel bad about using approximate scores for my comparison.

The reported battery life for the iPad Pro is around 10 hours according to Apple – who, in the past, has been a bit conservative with their battery life estimates. Microsoft says that the Surface 3 battery life is (up to) 10 hours. But, according to my own testing, it has a battery life of closer to 7 hours and 45 minutes (web browsing). So, we will see what the iPad Pro provides when we can actually get our hands on it.

But, it is probable that the iPad Pro will give you more battery life than the Surface 3.

We can’t talk about the keyboard without bringing up the fact that the iPad Pro is lacking a kickstand. Yes, the Smart keyboard will give you a little bit of wiggle-room to adjust the screen but it does not offer the flexibility of the Surface 3’s 3-position kickstand. In addition, some hands-on reviewers have said that the keys on Apple keyboard don’t quite feel right and that they’re spaced too far apart.

On top of all that, the Smart Keyboard is considerably more expensive than a Surface 3 Type Cover coming in at $160 USD vs. $130 USD.

The Apple Pencil, on the other hand, seems to be a hit. While virtually everyone agrees that the Surface Pen is good, most seem to think the Apple Pencil is at least as good or better.

It’s probably worth noting that the Apple Pencil is 2x the cost of the Surface Pen ($99 USD vs. $50 USD); so, it might be a case of “you get what you pay for” or another example of the “Apple Tax” depending on how you view such things.

It’s no secret that the Apple Store offers many more apps than the Windows Store (though you could argue about exactly how many variations of “Angry Birds” you might need) so, from a store perspective, Apple (not necessarily the iPad Pro) has the advantage. However, Surface 3 to even out the whole Apple Store vs Windows Store thing.

Also, the Surface 3 – which runs a full-blown version of Windows – will let you load just about any Windows application or program ever made. Since the vast majority of business programs (along with a healthy chunk of academic programs, not to mention most games) have been made for Windows for the past 30 years or so, I would say the Surface 3 has a distinct advantage when it comes to applications and programs.

iPad Pro vs Surface 3: Which is for You?

Now that you have an idea of how they stack up to each other, let’s talk about which is better for you. As you might expect, both devices will let you browse the web, email, Facebook, Tweet, etc… So, I’m not going to try to make a recommendation based on such mundane points.

Instead, I’m going to give you MY OPINION on which device you should get based on different use cases.

Get an iPad Pro if…

If no single aspect helps you make up your mind between the two tablets, pick which of the points above mean the most to you and make two columns (one for the Surface 3 and one for the iPad Pro) then assign “votes” accordingly. If something is really important to you, give it 2 “votes”. Sometimes it helps to see things in black-and-white 🙂

iPad Pro vs Surface 3: My Thoughts

Look, despite this being Love My Surface site. I’ve been in the IT field for a long time and I know that no device is always “the best” in every situation (despite what fan boys say).

Both devices are good and each has their strengths and weaknesses. You need to understand why you want/need a tablet. After you do, your choice will be easy. Personally, I’m sticking with the Surface. It works for me.

Now, if you’ll excuse me, this has been a long post to write, so I’m going to fire up a game of KSP since I can do that on my Surface (but not an iPad Pro).