So, I just finished up several hours of hands-on with the Windows 10 January preview on my Surface Pro 2 and here are some of my thoughts…

First, let me start by letting you know that the January Tech Preview is far from finished. There are some bugs (information below) and incomplete features but, it seems to be a bit further along than the first version I reviewed a couple of months ago which felt a lot more like Windows 8.1 with a few additions for keyboard and mouse users.

As an added bonus, you can install it on top of Windows 7 or Windows 8.1 and it includes a (hopefully fully working) rollback mechanism this time. The earlier version required a wipe and re-install to go back to a previous version of Windows.

Installation was pretty painless, after downloading the 2.2GB update from Microsoft, you’re greeted with the following “are you sure” window… 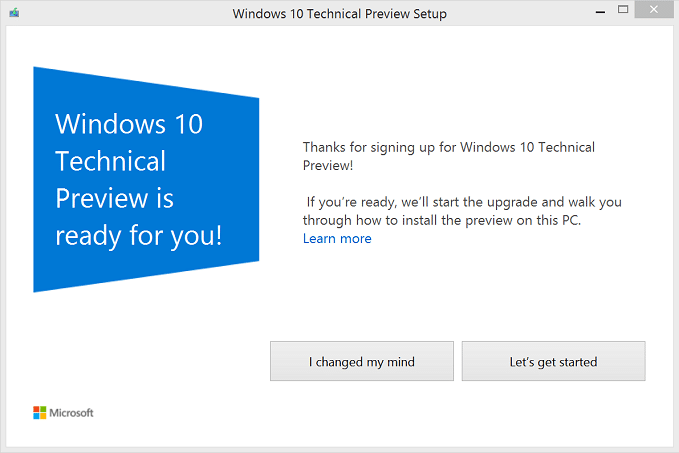 Then the legal disclaimer… 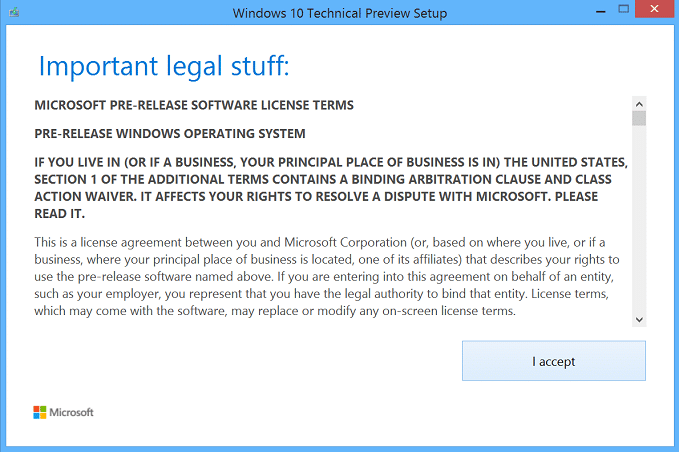 Then it looks over your system… 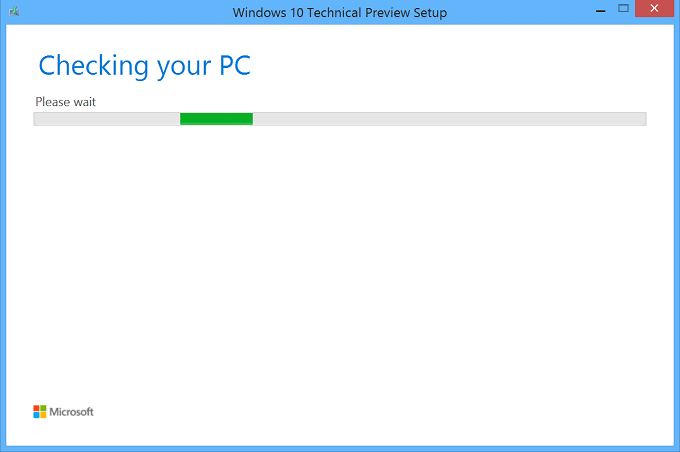 Finally, it let’s you do the installation. I thought it was a nice touch that you could schedule the installation as opposed to doing it right then but I can’t imagine someone deciding to do an upgrade like that, then not wanting to finish right away. 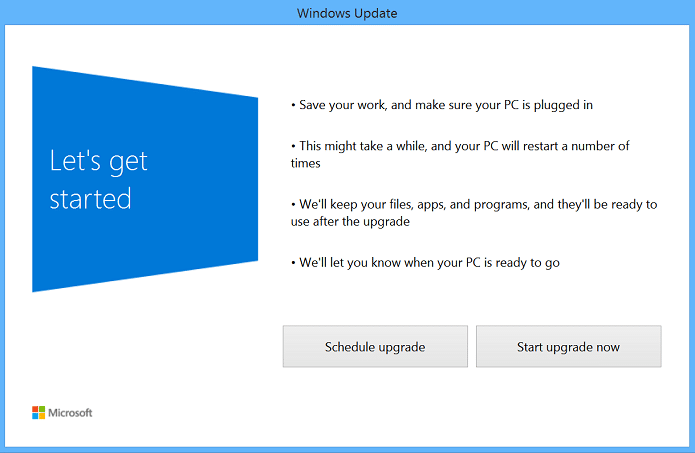 Oh well, the option is there for you, anyway.

It will take quite a while to do the upgrade but, on the plus side, it did it without wiping any of my data or applications (which is awesome because I have a pretty good game of Galactic Civilizations 3 beta going and I forgot to back it up).

The layout of the Windows 10 Start menu is significantly changed from the original tech preview. All of the basic pieces are the same but the overall feel is more minimalistic. 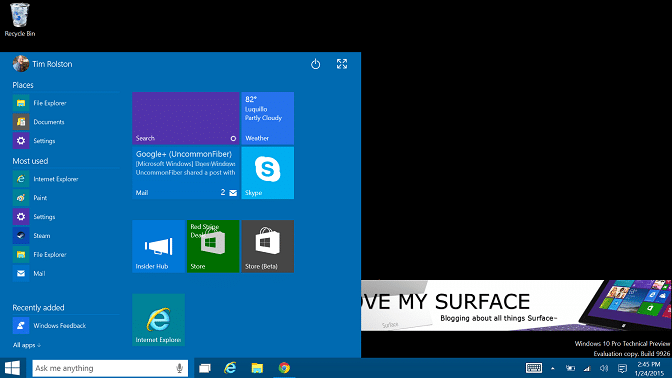 The result is a cleaner, less cluttered interface that you can customize the way you want..

The OS has gotten a bit more “Androidy” in appearance which seems a bit more modern and minimalistic than in the past.

New, brighter icons in File Explorer are probably the most obvious change. 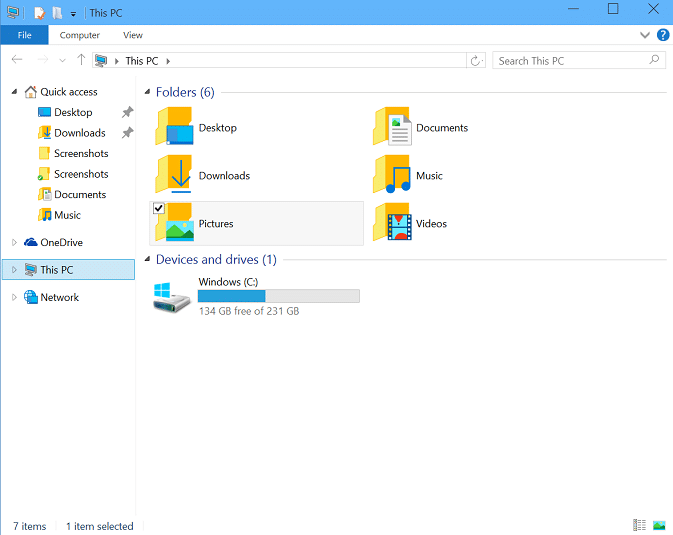 There’s also a few new things like a Recent Files list (not shown) and Pin buttons (upper left) to make it easier to find things you want to keep handy.

You’ll also see a big change in style when you look at settings, I’ll cover those in a separate section below (Action Center).

Another place you’ll see a slight change is the top icons when something is windowed. In the figure below, the left is from Windows 8.1, the one on the right is from the January Preview.

In case you’re wondering, the double arrow button only appears for Modern apps and makes it completely full screen (i.e. no taskbar) 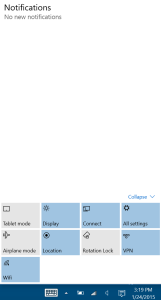 A big change is the removal of the Charms Bar. It has been replaced with what Microsoft is calling the Action Center which looks significantly different but pretty much functions the same. You can see what it looks like by clicking the figure to the right.

It’s still accessed like before (with a swipe in from the right of the screen) but, it seems a little easier to find things with it after you get used to the new look.

Also, you can see the “Tablet Mode” button is located here to allow you to manually switch back and forth between desktop and tablet mode.

One gotcha on that as the button is a little counter-intuitive: you would think “lit-up” (grey) is on but, it’s on when the button is blue.

Microsoft also updated  the look and feel of the Settings menu along with the Action Center. Here’s what it looks like now. 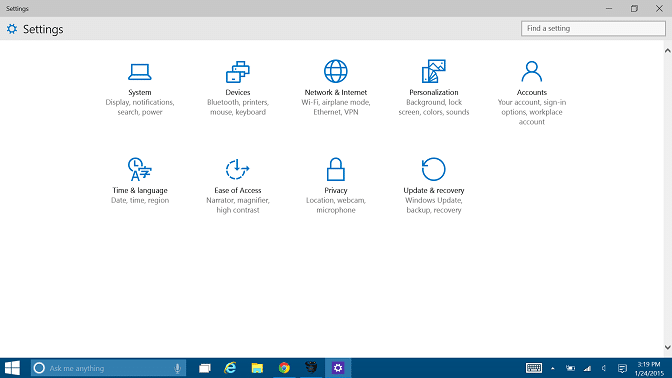 This version does include some semblance of the much touted Continuum feature Microsoft is promising to allow for seamless transition between tablet and desktop modes on your Surface. 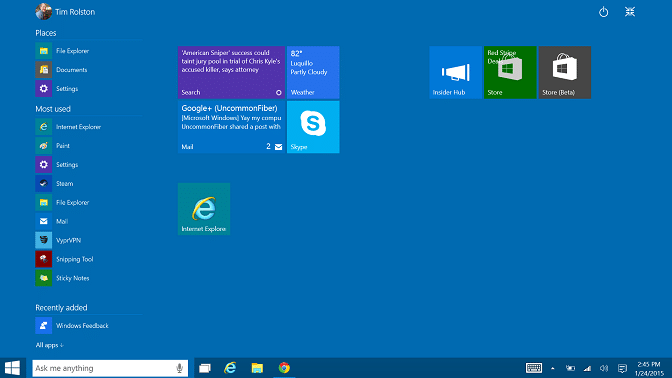 Unfortunately, at this point, it’s unfinished (at least I hope it’s unfinished and they don’t plan on leaving it like it is). Currently, activating tablet mode seems to do the following:

Overall, after getting used to it, I’d say it’s about 80% of the way there for switching back and forth between desktop and tablet modes. IMHO, Microsoft can pretty-much finish this up by doing the following when the Surface is in tablet mode:

I believe the changes proposed above would work well in tablet mode and further blur the lines between modern and desktop applications which might result in a better user experience.

For desktop mode, just leave it pretty much the way it is now.

There is a definite but subtle difference in the level of gesture support between desktop and tablet modes. For example, when in tablet mode, you can close an app just like you can in Modern on Windows 8.1 by grabbing it and dragging it to the bottom of the screen.

In desktop mode, it just moves the window to the bottom of the screen. 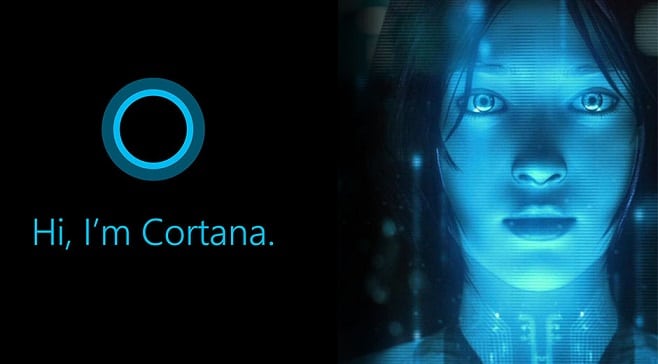 Cortana finally makes her appearance in Windows 10 with this version. She “lives” next to the Start button and is represented as a small circular icon or as a text search bar depending on what mode you have your Surface in.

Also, you can access her by voice using the “Hey Cortana” command.

In their blog post announcing the January preview, Microsoft outlines some of the known issues with the January Tech Preview.

In addition to the above list, there is a slew of things on the Windows Insider forum. One user started a handy thread where people have been listing issues they found.

Overall, I’d say Microsoft is moving in the right direction. The visuals are in a more “Androidy” style than Windows has been in the past but they feel fresh and modern. Also, they’re making progress with the switch between desktop and tablet mode which, as a Surface enthusiast, makes me happy.

As you might expect, there are some features I didn’t cover in this review (such as the multiple desktops) but, hopefully, this is enough information for you to know where Windows 10 currently stands and how it might affect your Surface experience when it comes later this year.