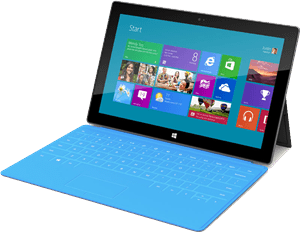 Jo (my wife) and I were very excited last Friday. We had ordered a brand new Surface RT 64GB tablet with a baby (don’t know if they meant it to be that color but it is) blue touch keyboard and were very anxious to play with it.

Both of us work as IT pros and were looking forward to seeing how it measured up to other tablets we’ve used in the past like the iPad and Kindle Fire.

Like you, we saw all of the happy dancing people in the trendy, Apple-esque commercials and heard all the early reviews (both good and bad) and we were ready to see if it lived up to the hype. So, since we were both looking at it independently, we figured we could give you the his and her first impressions of the Surface RT.

My first impression was that Microsoft had hired someone from Apple to do the packaging. It was sleak and proudly proclaimed “Surface” on it in stylish lettering. One point for Microsoft in the “First Impressions” game.

When I first picked it up I thought it wasn’t particularly heavy (just slightly heavier than the iPad 3) but it felt far more… well… solid. I felt like I could fend off a mugger by using it as a club. The screen was very responsive and looked good and crisp. After some initial issues figuring out the gestures, I got the WiFi connected and was browsing through the Microsoft store looking for software in no time. I found many of my favorites there (Netflix, Evernote and Dropbox, for example) but the store seemed a bit light in comparison to the Apple store. Microsoft says they’re working on it.

The apps opened quickly and were very responsive with no annoying waiting. IE 10 actually worked well and rendered all of the websites I visited without a glich.

As I played with it more, I discovered that the gestures started coming easier so I delved into the software. That’s where I hit my first snag…

Skydrive. If you didn’t see it, I already posted something about this issue in an earlier post (https://www.lovemysurface.net/skydrive-and-surface-rt/‎) I was a bit annoyed to say the least. It really makes the Surface RT a lot less useful if you have to be connected to the Internet to use your data. Apparently Microsoft is working on changing it but, until they do, it’s a serious black-eye for the device.

The version of Office that came on the device is a bit cut-down but functional. The jury is still out on the touch keyboard. It’s responsive and the track pad works well but, it just feels weird when I type on it.

All in all, I’d say my first impression was favorable. I definitely like it but the scarcity of the apps currently in the Microsoft Store is holding it back a bit and that glaring Skydrive problem.

From my prospective, I instantly loved the hardware on MS Surface RT.  It is light and feels solid.  The VaporMg it is made of feels sturdy and the graphic display is amazing.  I like the screen layout as well. I know some folks have been unhappy with the wide screen but I think it’s great for both reading and typing documents. In portrait view much less room is taken by the on-screen keyboard and so more of the document is visible.

I also like that is has USB, HD video out, and microSDXC ports.  I love being able to plug in a wireless mouse!

Oh and yes, the snap-on mechanism for the keyboard is really cool.  It does make that all so “crunchy” sound but I don’t think I’d break out dancing over it (you know, like in the commercial).

So, for hardware – TWO THUMBS UP!

Hmmmmmm, I’m going to give it some time but so far, it’s been kind of tough.  It’s surprisingly responsive but the feel of it is weird and I’m constantly mistyping with it.  I may need to switch to the type cover but first I’ll give it a week or two.  For now the touch keyboard gets ONE THUMBS UP and ONE THUMBS DOWN – so maybe.

The Win 8 OS is a huge surprise with a touch screen.  I’ve been using it on my MacBook air for several months now with mixed feelings but now with a touch screen, I like it a lot better.  It is clear a touch screen is what it was designed for.  There is a large learning curve for some things but I’m OK with that.  In general, it seems very responsive and snappy on the device.  I also love having Office apps pre installed on the Surface RT.  It comes with Excel, Word, PowerPoint, and OneNote – all Home & Student 2013 RT Preview editions. They seem to all work fine sharing files with my Office 2010 desktop.  The mail application seems a bit simplistic but I was able to install all five of my various email accounts on it without a problem.  More reviews on applications and performance will be coming later but from checking out the Microsoft Store, there is a lot there but substantially less than the apple or android stores.  I’m not a huge game consumer but in general, everything is just “less of”.  So, TWO THUMS UP for OS and software.

Now, please allow me to rant on the side: the lack of offline mode on the SkyDrive is more than a little disappointing.  Working in the IT field, I can tell you that this is the one thing everyone thought the Microsoft tablets were going to have over the others. I feel so strongly that I actually emailed Microsoft about it.

Hopefully, you found our insights useful and you can get a bit more of the technical details of the hardware after the break if you’re interested.

If you are the extra technical type, you can get the full specifications of the Surface RT.