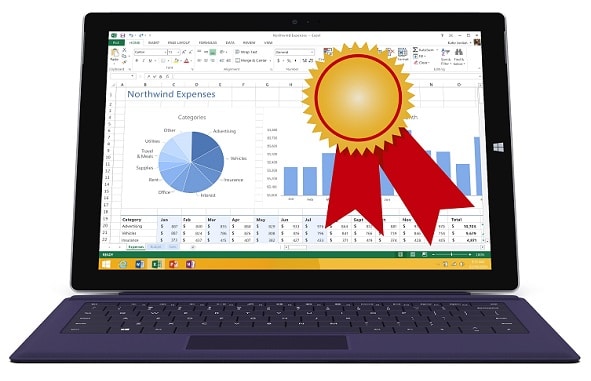 Surface Tablets Are Gaining Momentum – and it’s about time:

We have been at this for over two years now and, by this, I mean blogging about Surface tablets. We started originally because we have many, many years of experience in Information Technology and we both saw the value of the Windows-based Surface tablets. But it seemed, that no one else did and especially not the media. As soon as Microsoft released the first Surface tablets, the media were like vultures, ripping it to shreds while shouting the glories of iPads and Android tablets.

Right off the bat, we called it BS and started this blog to help others to be more productive and get the value out of these awesome tablets. And now, finally, we feel vindicated because the Surface tablets are gaining momentum and fast!

Let me tell you the latest developments that are really putting these devices on the map..

I have to be honest and tell you that it hasn’t always been easy for us to go against the grain – to contradict the media and even our Apple-phile friends, not to mention the Android drones, errr….I mean fans. But I am glad we did it because finally we feel like it was worth it. Now, the world is starting to truly embrace and value the Surface tablets. Here are some areas where this change is happening:

From the beginning, Microsoft targeted education as a primary market and offered a 10% discount to teachers, students, and education administration.

Why? Because the Surface makes sense in the education environment. Think about it… who benefits more than education from a device that allows you to take notes, make easy presentations, and runs Windows software?

Why, education users of course.

And now, Microsoft has taken it even further by offering the 10% OFF all Surface 3 pre-orders (including the pen and the Surface cover\keyboard) and many schools are signing up and committing to purchasing and deploying these devices even before they are released. I’m not just talking about small primary schools; I’m talking about even colleges and universities, like University of Phoenix! Go Surface 3!

Microsoft has also taken great care to work with software developers that target the education niche, for example music education. Soon you will be able to work easier on your Surface with music composition and notations through a piece of software called Sibelius.

Through a partnership with Microsoft, Surface Pro 3 tablets and is directly targeting music education. Check out the video below of what it can do:

It warms my heart to see some of our new business friends here in Puerto Rico, buying the Surfaces. I think it’s an affirmation that the business world continues to embrace the devices. I already wrote about major airlines committing to using Surfaces, see post Surface Pro 3 Hits The Skies but we’re finally seeing more and more Surface tablets in our daily business interactions.

Funny thing is that I used to walk into Starbucks and look around and only see Apple devices (mostly laptops) but now I can walk in and see a peppering of Surface tablets too. And I’ve even had folks approach me in coffee shops to ask me about mine. A couple of months back, I was in Tampa having some coffee before I headed for the airport and two gentlemen approached me to talk about my Surface Pro 3. They also had them and loved them and they were both businessmen.

What a great testament to the Surface!

Since between us we have over 40 years of experience as IT Pros, we have always wondered why more IT shops haven’t embraced the Surface tablets –  we certainly did; Tim wrote about using the Surface as an IT Pro tool, see Turn Your Surface Into Network Troubleshooting Tool, or Turn A Surface Into Windows Kiosk .

But now, finally, Microsoft has wizened up to this and has created a great online resource for IT Pros. One simple webpage where you can easily find everything you need, from all firmware and hardware updates and drivers to knowledge base articles to deployment guides and everything in between. If you’re an IT Pro, you need to check out the Surface TechNet Page.

I’m going to stop here and not go into the art world and the things you can with the Surface Pen because that is not my world – you can refer to Surface Pro Artist for that (sorry I’m artistically-challenged) but I think that the market share gain that Surface tablets have experienced over the last year, while the iOS devices slumped, speaks for itself.

Don’t get me wrong, I think competition is healthy and there are some that will always favor the Apple or Google devices but after years of experience with each of the big 3 tablet OS’, I am not one of those folks.

The weakest thing about the Surfaces, and also the biggest source of criticism from the media, has always been the lack of apps in Windows Apps Store; but even that has been mitigated now with the Surface 3 that runs a full version of Windows 8.1 and can be used to install any of the millions of full Windows programs.

So, yeah….Microsoft Surface tablets are gaining momentum and with Surface Pro 4 and Surface Hub on the horizon for later this year, the sky is the limit. That is all I have to say..