I’ll bet it plays out just like this example from the Oatmeal?

Why? I can tell you, it’s because people have a psychological aversion to shelling out real money for something as ethereal as software in the form of video games. We don’t have a problem buying hardware because we can put our hands on it, so it feels like something concrete. Not so with computer games. It’s difficult to assign a value for you money for something so ethereal, isn’t it?

But what if you thought about it as “Minutes of Entertainment”, much like you do (whether you realize it or not) about a movie or a book?  If you do that, then you can assign real value to it and decide if the game is worth your money.

Let’s calculate the cost of a movie; for now, we’ll skip the concessions and assume an average movie is 159 minutes and the average cost for a ticket of $7.78. This means that the cost per minute of entertainment is $0.048. Let’s round that up to an even 5 cents.

Books are a little harder to calculate as people don’t all read at the same speed. However, if we look at the average number of words in a novel (about 64,000) and the average reading speed of about 300 words a minute we can calculate the time spent being entertained by a book, which is about 213 minutes. Finding the average price of a book is challenging as paperbacks are usually about $7.25 but hardcovers are $28.73. So, based entirely on my own experience (and looking at the books on my bookshelf) I’m going to assume a 25/75 split in favor of the paperbacks. This brings our average book price to $12.62.

So now we can work out the cost per minute of entertainment to $0.059. Let’s round that up to an even 6 cents.

Games are difficult to calculate the cost per minute of entertainment especially since the length of games vary from title to title and player to player but if we assume a game will hold your attention for no more than a week and the average gamer plays 13 hours per week, let’s assume you’ll put in 10 hours on a game. For now, let’s assume you’re buying a $4.99 game because those games tend to be the type with longer play times. With some quick math, we come up with a cost per minute of just $0.0083. We’ll round that up to 1 cent to keep the math clean.

Of course, this is a best case scenario. Let’s throw in some other game times and prices. To simplify it, we can make a chart.

The short of it is that anything in the green area is at least as cheap as a book or a movie for entertainment.

Let’s simplify it a bit more by taking the prices on the chart and figuring out an overall average per minute of game play  A little math later and we have a number of just $0.0372. Again, let’s round that up. So, we’ll call it 4 cents.

And to drive the point home, let’s make a graph. 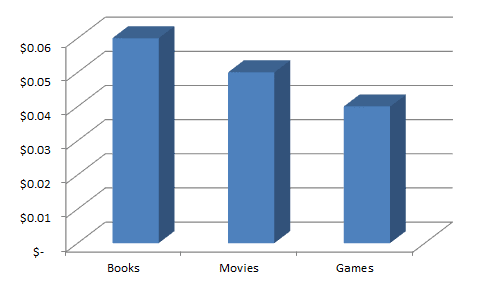 Wow!!! The data seems clear. Unless you buy a dud and only play it for just 20 minutes, it is, by far, cheaper to pay for that game than going to a movie or buying a book for entertainment. So, if you’re looking to kill some time, go ahead and get that game. It’s the financially responsible thing to do.

Reply and let me know what you think.