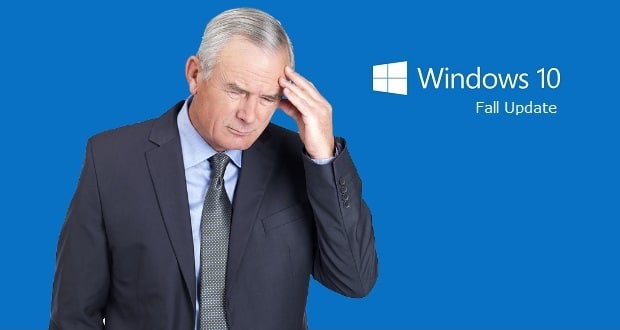 Some folks have been having problems getting and/or installing the Windows 10 Fall Updates. So, I’ve done a little bit of digging into the issues people have been reporting and have come up with a list of 4 different Fall Update problems and what you can do about them.

Microsoft is rolling the update out over the next couple of days; so, if you haven’t seen it yet, it’s probably because it’s not your turn to receive the update yet or you’ve chosen to defer updates. Another possibility is that it’s been less than 31 days since you upgraded to Windows 10. The following is from the Windows Update FAQ…

If it’s been less than 31 days since you upgraded to Windows 10, you won’t get the November update right away; this will allow you to go back to your previous version of Windows if you choose. After the 31 days have passed, your PC will automatically download the November update.

Another common problem people are having with the Fall Update installation seems to be that it hangs at around 44% and fails to install.

It turns out that a vast majority of the folks who experienced this issue had a SD card installed in their Surface during the install. Simply removing the card resolves the problem in most cases.

So before you install the Fall Update, remove your SD Card and you probably won’t have to worry about it.

On a Reddit thread, some folks are reporting that certain software is being uninstalled as part of the Fall Update installation. These uninstalls seem to be happening because the Fall Update, basically, does a full “upgrade” of Windows 10 RTM to Windows 10 (1511).

Unfortunately, unlike when folks upgraded from 8.1 to 10, there doesn’t seem to be a list of uninstalled programs made available to you, so you may not realize that a program needs to be reinstalled.

So, make sure you check your programs after the upgrade to verify that they’re still there.

Just like the Windows 8.1 to Windows 10 upgrade, the upgrade process leaves a windows.old folder on your Surface’s hard drive so you can roll back to the RTM version if you want. Unfortunately, that folder may be quite large (mine was 19.3 GB) and can result in you having very little disk space available after the install.

Fortunately, the fix is the same as it was during the original Windows 10 upgrade: use disk cleanup to remove the windows.old folder.

Just be aware that by doing so, you’ll lose the ability to rollback the Fall Update from your Surface.

OK, there’s my list of 4 fall Update problems and how to handle them. Hopefully, you won’t have any of them but, if you do, at least you’ll know what to do.