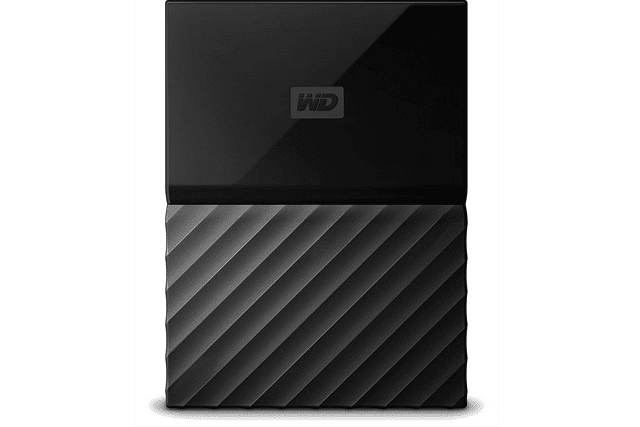 While several methods and devices exist for backing up data or extending how much your system can hold, here are some of the benefits of having a WD My Passport external hard drive.

Even though most desktop and laptop computers have large internal hard drives, if you’re gaming with them, then you may quickly run out of space. Also, if you have sensitive data on your computer, such as business records for your company, then backing that information up to another drive is important for security and record retention. 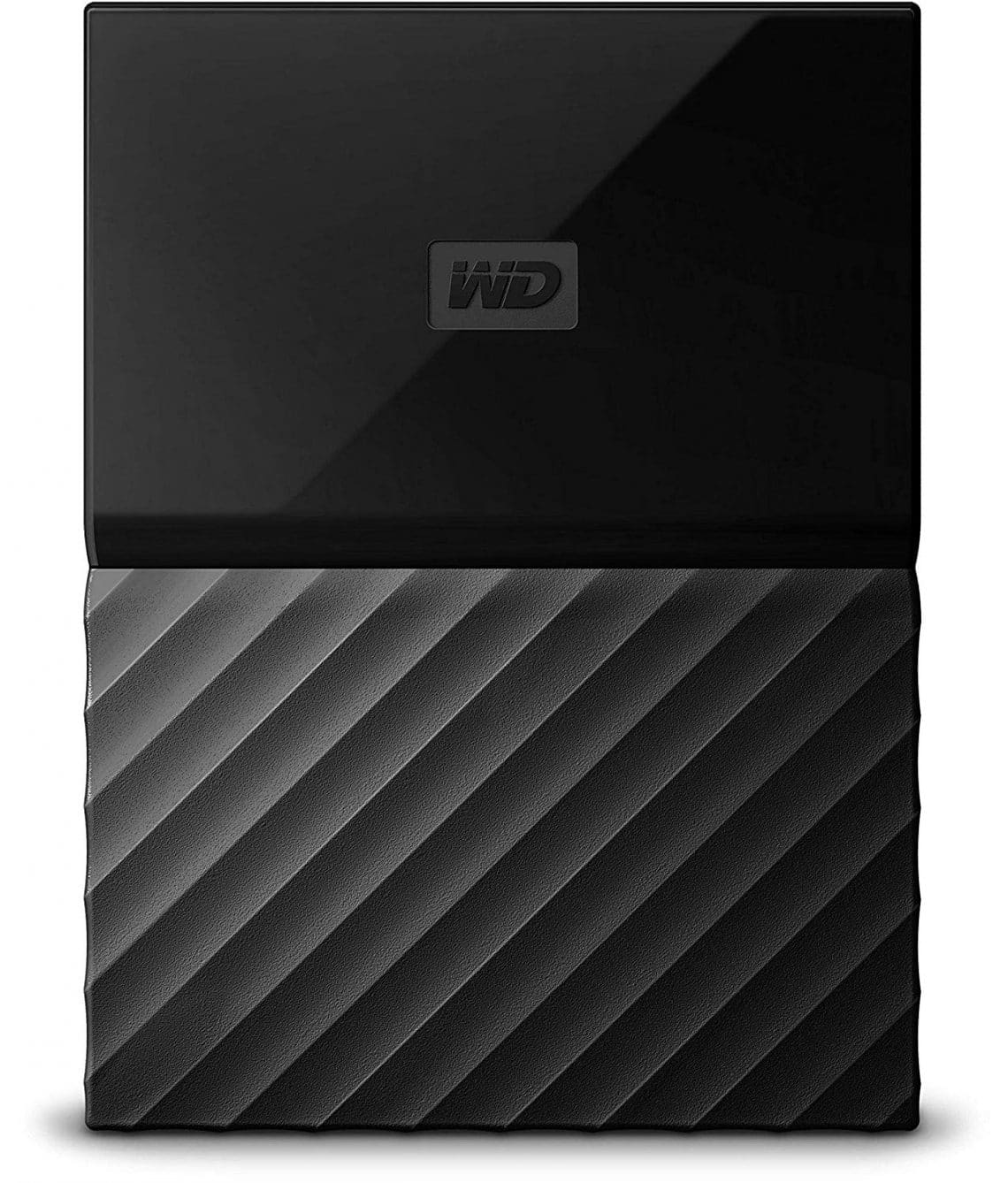 The main benefit of having an external hard drive is security. If you run a business, whether it is an e-commerce site or a brick and mortar company, it makes sense to back up your records to another hard drive in case your computers crash, are stolen, or a disaster destroys them.

If they are backed up on an external hard drive, then the records can be easily retrieved, and you can use them to keep your business running. In addition, it is an easy way to ensure none of your records are accessed because you can add protection to them, like passwords or you can encrypt sensitive data like your customers or company’s financial information.

Instead of buying CDs of your favorite music or DVDs of the movies you wish to see, you can download them directly to an external hard drive and save space in your home. On a six terabyte hard drive, you could store up to 9,000 CDs on it. A CD only lasts for about three years, but you could store them almost indefinitely on a hard drive.

Many external hard drives are small and lightweight, so you can take them with you when needing the information they hold elsewhere. If you need to transfer information from one computer to another, you could copy the backed-up files off the external hard drive to the new system while still working on your older computer.

What is the WD My Passport and How Does it Work?

It also comes with the software that is needed to get started using the drive, which includes WD Discovery, WD Backup to start backing up files from your computer, WD Security, and WD Drive Utilities. The drive is password protected, plus it has hardware encryption for an extra layer of security. 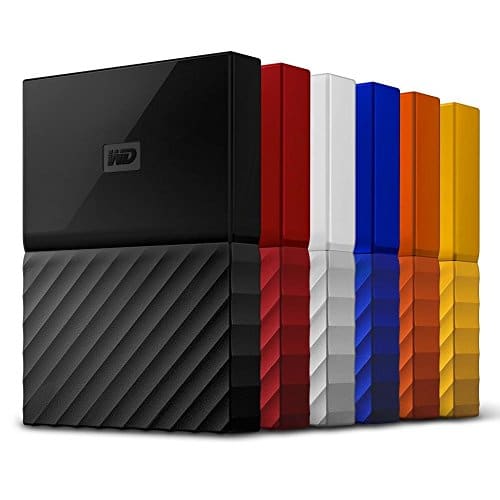 The hard drives formatting is for Windows systems, including Windows 7, 8, and 10. It would require reformatting for other operating systems. The external case on the hard drive is available in six colors, no matter the size of the drive. Those colors are:

It would be easy to color coordinate your files by putting them on separate drives. For instance, if you’re a gamer and collect movies, you would put all your games on a red drive and your movies on a blue one.

The Western Digital company, which manufactures these drives, has headquarters in San Jose, CA and makes other drives and storage solutions for computer systems. Their subsidiaries include SanDisk, Tegile Systems, UpThere, Inc., Fusion-io, and Western Digital Technologies, among others.

What Makes the WD My Passport Unique? 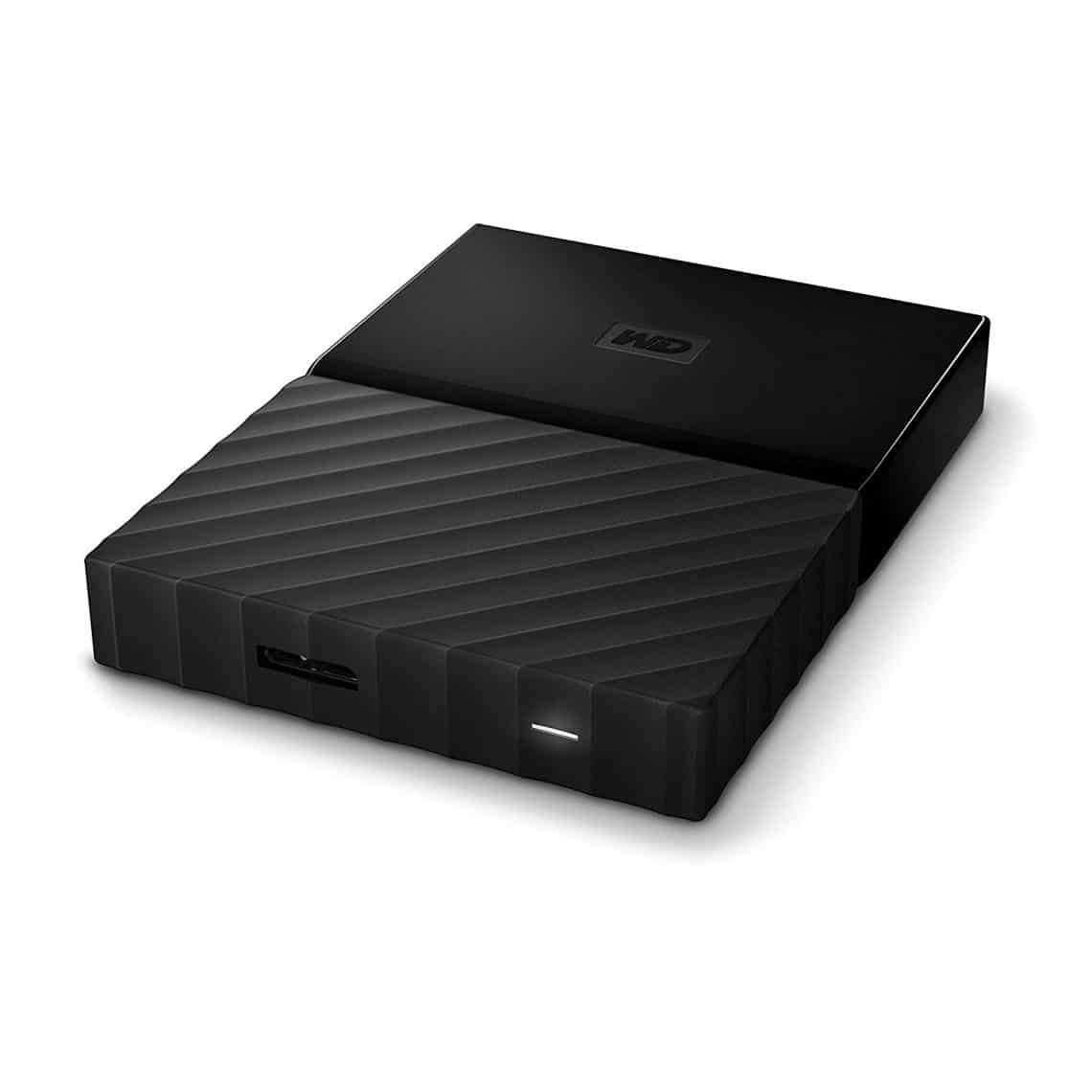 However, the Passport is smaller than a cell phone, which makes it easy to take with you when you want to share something from your system with a friend or colleague. 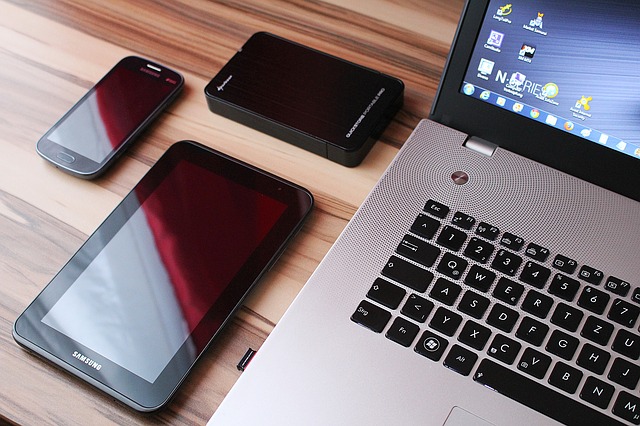 Compared with other external hard drive options, the WD Passports have a good price point. They are less expensive than other drives like the Seagate or LaCie hard drives. The price depends on the size drive that you buy.

For the one terabyte drive, you can expect to pay $ on the WD website. However, you may be able to buy it at a discount from sites like Amazon depending on the seller. A two-terabyte size lists for $$, the three-terabyte model is $$$, and the four-terabyte hard drive is $$$ on the Western Digital website.

Buyers can save some money per unit when they buy them on sites like Amazon.com. It depends on the seller, so you need to be careful when you’re examining them on the site. For instance, one seller had a 2tb Passport selling for $$, but another retailer had it selling for $$. As long as you read the description and pick the item carefully, you should be able to buy it for a discount on Amazon.

What The Experts Say 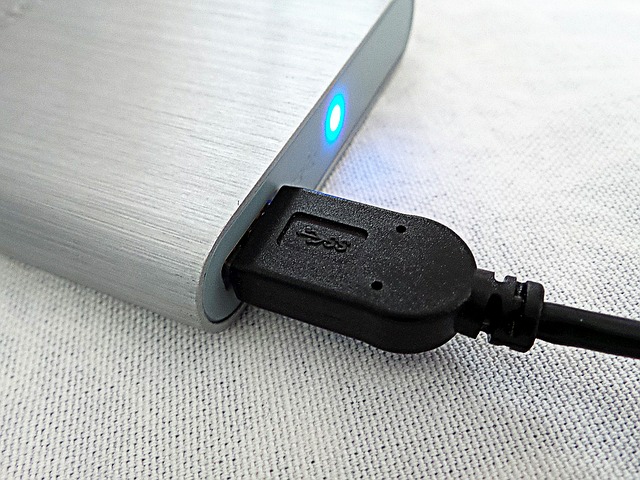 Experts on websites that review computer technology also like My Passport, giving it mostly positive reviews. PC World magazine found the hard drive to be a good buy, though they think it is a bit slow when it comes to uploading large files. For small files, it works just as well as their competitors’ hard drives, but it usually costs less than the other drives.

PC Mag also likes the hard drive, saying it provides a solid performance, fun design, and good price for the capacity that is available. However, they didn’t like that it doesn’t come with a cloud storage option like some of its competitors. Still, they consider it a good buy if you don’t want to spend a lot of money on extra data storage to backup files, keep important documents, or download video games. 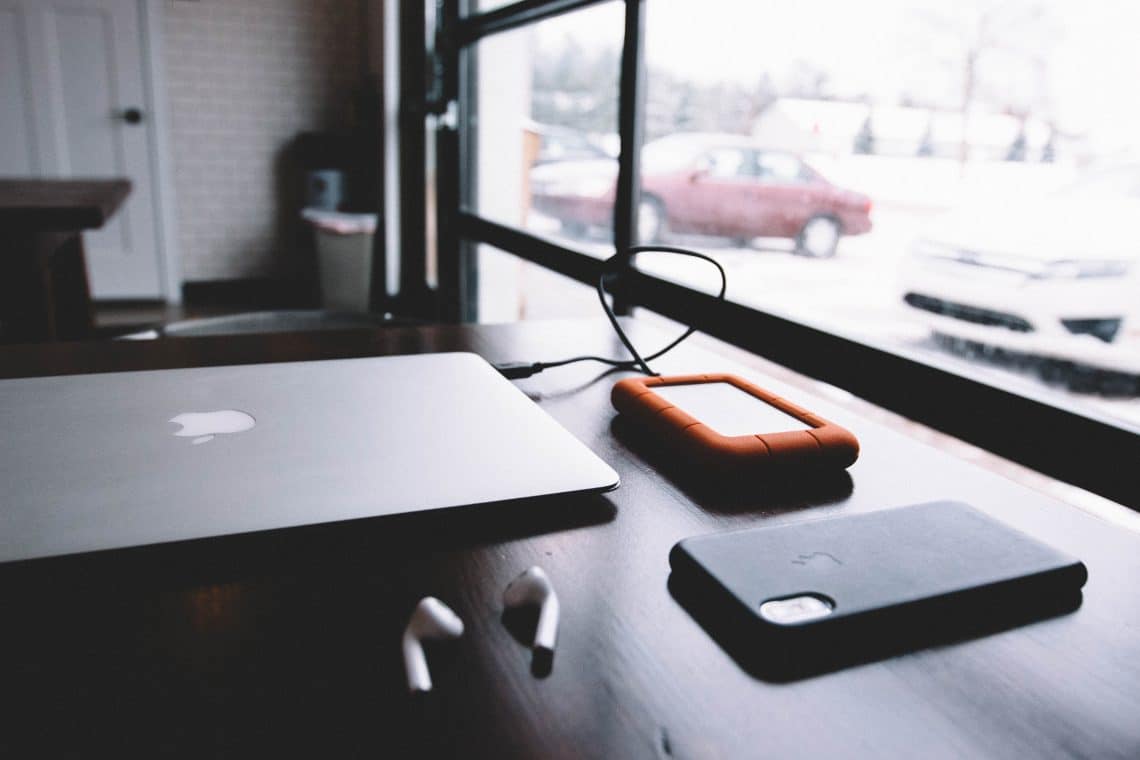 However, Mac owners can make the hard drive compatible with their systems by downloading the NTFS driver to their Macs. Another option is to reformat the drive, which is also required by My Passport if you want to use it with any other operating system. The Seagate drive connects to a PC or Mac via a USB 3.0 port.

Also, the hard drive features a large capacity memory of four terabytes. It comes with two years of service with 200 Gigabytes of cloud storage via Microsoft’s OneDrive service. It retails for $$$, but you can often find it on sale for $$, which makes the price comparable to the My Passport. It works out to be less expensive per gigabyte at 0.038 cents. 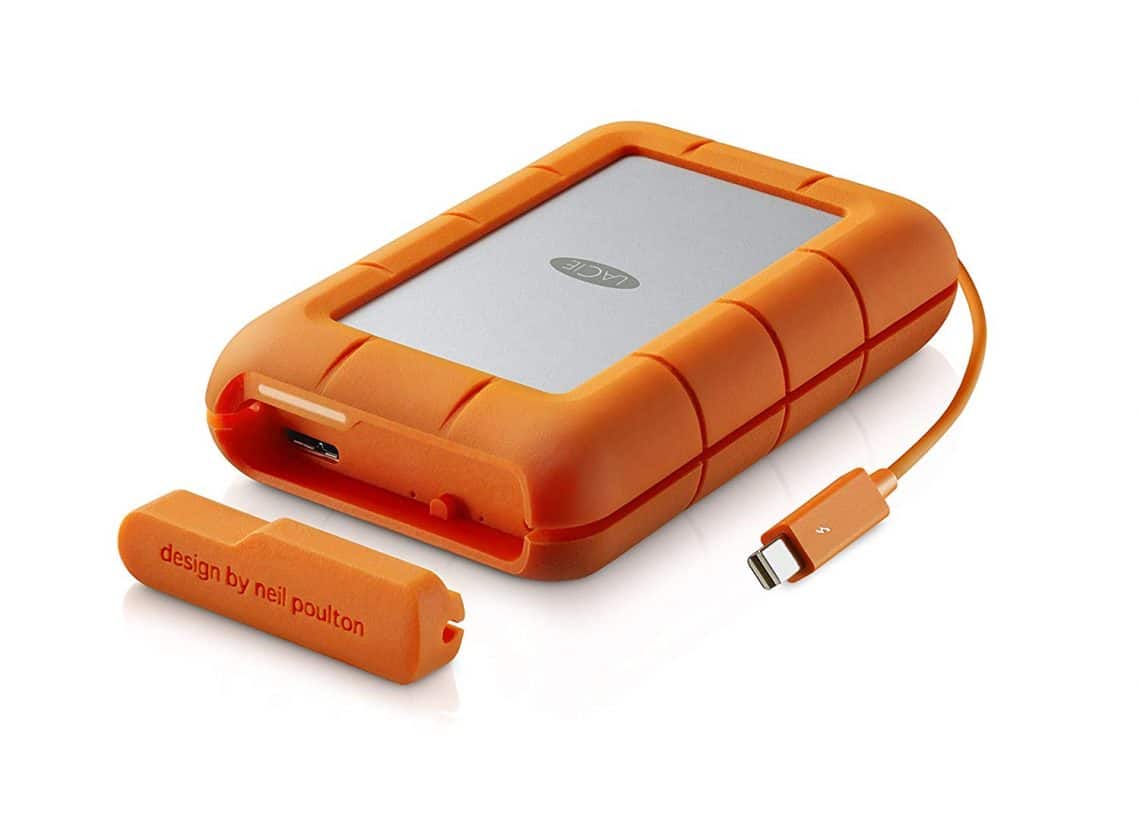 This external hard drive isn’t quite pocket size at 1.3 x 3.75 x 6 inches. It was built to be able to handle being transported without losing data or being broken in the process. The LaCie Rugged RAID is a bulky hard drive with four terabytes of data available for backing up files or recording your favorite movies or music on it, then sharing it with others.

When installing the drive, it allows users to partition it and install backup software. Otherwise, it can be formatted to run with both Windows and Mac operating systems. The LaCie hard drive is more expensive than most of its competitors at a retail price of $$$ on Amazon, although it is available from other sellers for $$$.

It also connects to a system via USB 3.0, and it provides faster performance than the My Passport when reading and writing files. 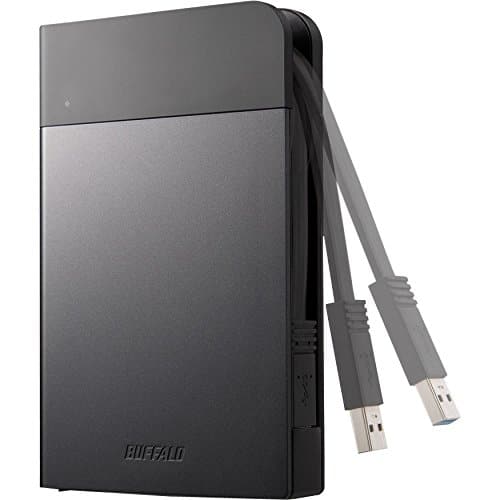 Another external hard drive comparison for My Passport is the Buffalo MiniStation Extreme NFC. It contains one terabyte of space, although the company has other models with more drive space. It is built more rugged than most external hard drives to survive being carried in a laptop bag or backpack when sharing games with friends or taking it to work.

It provides security features that other hard drives, including the My Passport, may not. For example, it includes 256-bit encryption, and the Near-Field Communication feature helps protect your data on the drive as well. Its USB 3.0 cable is built into the device, so you cannot lose it. The hard drive is small at 11 ounces and measures 3.54 x 5.55 x .83 inches.

It has a rating for an almost four-foot drop, so if you accidentally knock it off the table, it should survive a short fall. My Passport doesn't have a durability rating and can be prone to breakage if too roughly handled. The list price on the MiniStation is $$$, but it can be found on sale at $$$ on Amazon. However, at one TB, it is approximately twice the price of the WD one TB hard drive.

In comparison to these three drives, the WD My Passport is a less expensive hard drive, although it isn't made to be as rugged as the Buffalo or LaCie models. The Seagate Backup Plus is at a comparable price point, and it is a faster drive, so it could be a better buy than the Passport, especially since it also provides two years of cloud storage in addition to the drive storage.

Whether you need an extra hard drive to back up your desktop or laptop computer or want the space to download your favorite movies, then the WD My Passport can be a good choice for your needs. In fact, due to its price at under $, we recommend the drive for most needs. However, if you tend to be rough on technology, then you may want to consider a more rugged drive.

My Passport isn't water resistant, so it needs to be well protected when transporting it away from work or home. It can also break if it falls a short distance. However, if you put it to use and then put it away to protect certain documents, download photos, or store your music collection, then the small hard drive is a good buy for those needs.

With the option of buying it in different colors and memory capacities, they are inexpensive enough to use to color coordinate files and keep documents on for years instead of using CDs and other media that can quickly become outdated.