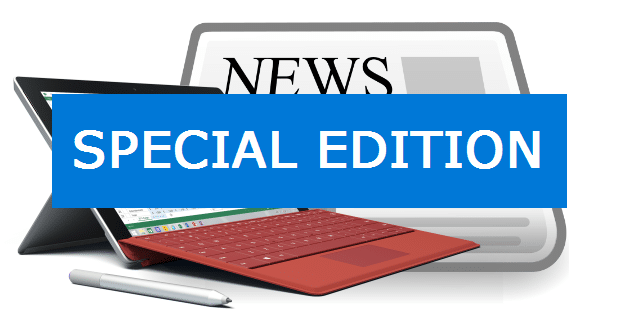 Lately I’ve been telling you about Surface Pro 4 rumors in my Weekly Surface News Roundups along with other Surface related news.

This week, however, just about all of the Surface-related news has been Surface Pro 4 rumors. So, I decided to go with it and make this a special edition of my Weekly Surface News Roundup.

The majority of the rumors are coming out of China, in particular from the website WPDang.com (the article was pulled a day or so ago so keep that in mind), and are presumably coming from leaks somewhere in the manufacturing chain. Some of the rumors are things we’ve heard before:

…. and here are some new rumors:

You can find more on the new rumors at these web sites: The Verge,  WinBeta, Redmond Channel Partner and, GeekWire. Just keep in mind these are all rumors none of us know anything for sure.

Until now, there was no rumored date for when Microsoft would announce it. However, The Verge website claims to have confirmed that Microsoft will hold a hardware event on October 4th, 2015 where several products will be announced such as an all new Surface Band, 2 phones (currently referred to as Talkman and Cityman) and, of course, the Surface Pro 4.

The basis of the SP4 form factor and charger rumors comes from the fact that Microsoft has promised Surface Pro 3 accessories like keyboard covers, chargers, and docking stations.

“We understand that for businesses to invest in Surface Pro 3, they need clarity on our commitment to hardware and accessories over time, so they can responsibly manage their investment choices” – Brian Hall, Microsoft

That doesn’t mean Microsoft won’t make any changes, though. The implication is that the Surface Pro 4 (or, at least some variants of the SP4) will be compatible with existing accessories. They might still make a variant with a different form factor or different ports/controls in addition to one with the same dimensions and ports as the Surface Pro 3.

The rumors about Windows Hello support for the Surface Pro 4 probably come from the fact Windows 10 supports it, however, it would be tough to fit an Intel RealSense camera (which is needed for Windows Hello to recognize you by sight) into the device if it stays as thin as the SP3.

But, a fingerprint scanner (which also supports Windows Hello but isn’t quite as cool) does seem likely.

To me, the possibility of a USB-C port is very promising. Since USB-C has up to 40GB/Sec of throughput, it would be an easy way to support the “multiple 4k displays” mentioned in the rumors. In addition, some Surface). Since Apple has already started using it, I imagine this one has a high probability of being true.

So, now you’re up to speed on the latest Surface Pro 4 rumors.