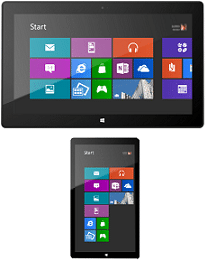 So, it seems the Surface mini rumor mill has cranked up again.

It started when Microsoft sent out invitations to “a small gathering” on May 20th at 11:00EDT in New York to certain tech writers. No mention of a Surface Mini was given.  However, the invitation did bear Microsoft Surface branding.

We think that’s a clue, along with the “small” wording, that a Microsoft Surface Mini tablet will be announced. Probably for release in the June time-frame.

As you may know, rumors of a smaller Surface tablet have been going on for some time and a small Surface tablet may help Microsoft better compete with the iPad mini and several small Android tablet models.

There are already Windows tablets (from Acer, Asus, Lenovo, Dell, and Toshiba) that sport a 7″ or 8″ form factor, but none from Microsoft’s official Surface product line.

After giving the media a few days to calm down their trying to “scoop” each other, I looked at dozens of different reports and Surface Mini rumors. After eliminating all of the obvious WAGs (Wild Assed Guesses), the remaining rumors are currently painting a picture that the Surface Mini will have the following features:

A price point in unknown but can be estimated to be around $250-300 based on the price of the current Surface tablets.

Of course, while these features make sense, they are only rumors, so some or all of them may be completely wrong.

So, what do you think? Is this a good move for Microsoft? Is it even going to be announced on May 20th or has everyone gotten worked up for nothing?