This article will cover how to do a rollback of the January Preview (build 9926) from Surface tablets and some bad things that happened to my Surface when I did so.

Fortunately, I also know how to fix the things that went wrong. So, if you rolled back your Surface (or other Windows 8.1 machine) from the January Technical Preview and are having issues, this article might help.

How to Rollback January Preview (9926) : Performing the Rollback

The rollback process with this version of Windows 10 is pretty simple (unlike the first version) just restart or power on your machine. When your Surface starts/restarts, you’ll see the following a boot menu appear. 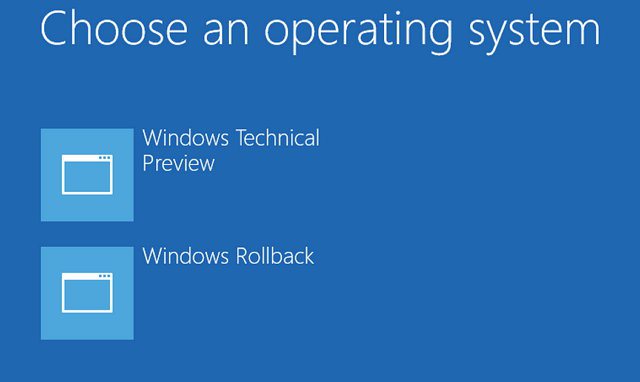 This menu has probably been bugging you the entire time you ran the January Preview but now it will come in handy.

As it always has, the menu has a 30 second timer, if you don’t do anything it will automatically boot to the Windows Technical Preview. All you need to do is choose Windows Rollback before that happens.

Next, you’ll see a message “Restoring your previous version of Windows”. Now it’s on automatic pilot. You don’t need to do anything but wait.


IMPORTANT: Make sure your Surface is connected to power during the rollback. If it’s not and it runs out of battery halfway through the rollback, you’re going to have a bad time.
It should take about 15-30 minutes and your system will rollback to Windows 8.1. After you’re back into Windows 8.1, give everything a once-over and make sure it’s working correctly.

How to Rollback January Preview (9926): Issues After the Rollback

Unfortunately, after the rollback, I discovered that some things weren’t working as well as they should. I made a list of the problems I found below:

How to Rollback January Preview (9926): Fixing the Issues

It turned out that (nearly) all of the problems I experienced were due to user profile problems. The rollback of the operating system worked fine but my user account profile, which was updated when I installed the January Technical Preview, didn’t fare so well as it simply wasn’t 100% backwards compatible when I switched back to Windows 8.1.

The good news is that there’s a relatively easy way to fix it. All you have to do is convert your log in account from a Microsoft account to a local account and then back. By doing so, the system will “reset” your account back to something Windows 8.1 can understand.

Doing this fixed 99% of my problems. The one exception was that the Mail app continued to be named “Microsoft.WindowsLive.Mail” but, it still functioned and i was able to send/receive mail. I ultimately resolved that issue by uninstalling and re-installing the Mail app (you can get it from the Windows Store). I had to completely reconfigure the mail client after I did that but it did the job and everything is working as it should now.

Hopefully, this will do the trick for you like it did for me. If it doesn’t then you might be looking at a full rebuild of the machine. You can do that by following the instructions to remove earlier versions of the Technical Preview here: How To Remove Windows 10 Technical Preview

Be aware that it will completely wipe your machine so make sure you backup everything you can before you start.