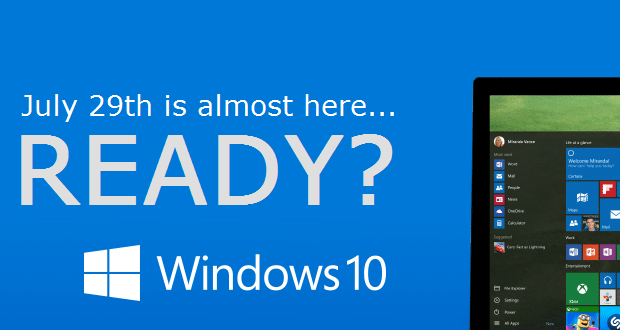 Now that Windows 10 is about to come out (or has already come out depending on when you found this article) it’s time to cover some last-minute information you may need to make sure you have a good upgrade experience with your Surface tablet and Windows 10.

I have covered a lot of Windows 10 information already and I know other writers have covered a large amount of additional info. However, since it’s scattered around the internet, it can be difficult (or at least inconvenient) to find.

So, I thought it would be helpful to put all together (in one place) for you, BEFORE you upgrade your Surface to Windows 10. If nothing else, having all the links right here will save you some time in searching for it, right?

Upgrading Your Surface to Windows 10: Reasons To Do It / Reasons To NOT Do It

If you didn’t see them, these two posts outline reasons you may or may not want to upgrade your Surface to Windows 10. Both are worth a read to make sure you know what you may be getting into with Windows 10.

Upgrading Your Surface to Windows 10: Before You Do The Upgrade

My article titled “Before You Upgrade Surface to Windows 10 – Do These Things!“, posted a couple of weeks ago, outlines some steps you should take before you begin the Windows 10 update procedure. The intention of the article is to make sure you’ve taken what steps you can to help the upgrade process goes smoothly.

In case something goes wrong or if you decide you hate Windows 10 after it’s installed, if you follow the advice in the article, you’ll have the tools you need to gracefully back out of the Windows 10 installation.

Yes you should be able to rollback to Windows 8.1 from within Windows 10 but, when I did so using a Technical Preview version, I had all kinds of weird problems and ended up needing to rebuild my user profile to remedy them.

Upgrading Your Surface to Windows 10: The Upgrade

Regularly, I’ve been asked time and again whether the upgrade will happen automatically (providing you reserved the copy) or whether there will be manual steps you have to take?

The answer is that a notification will pop-up sometime on or after July 29th letting you know the upgrade is ready. The upgrade process itself should be pretty straight-forward. I don’t think there’s any reason for you to be worried about it, just follow the prompts.

I got this answer for this question from Microsoft’s Windows 10 FAQ Page… so if I’m wrong blame them :-). You might want to take a look at this page because there is some other useful information about the upgrade process and support information, as well.

Upgrading Your Surface to Windows 10: Once Windows 10 Is Installed

In addition to the items in the “6 Reasons to NOT Upgrade” article above, there are a few other, less Surface-centric, things (not really “gotchas”) to be aware of:

If you have a Surface RT or Surface 2 tablet, I’m afraid you’re not going to be installing to the full version of Windows 10. However, that doesn’t mean you won’t be getting a Windows update.

This September, Microsoft said it will release Windows RT Update 3.  This update probably won’t be a huge overhaul but it’s expected to include an updated Start Menu which is based on an early version of the Technical Preview. Don’t let that lead you to think it will be inferior, a lot of people seem to think it’s actually better than the version of the Start Menu that made it into the final version of Windows 10.