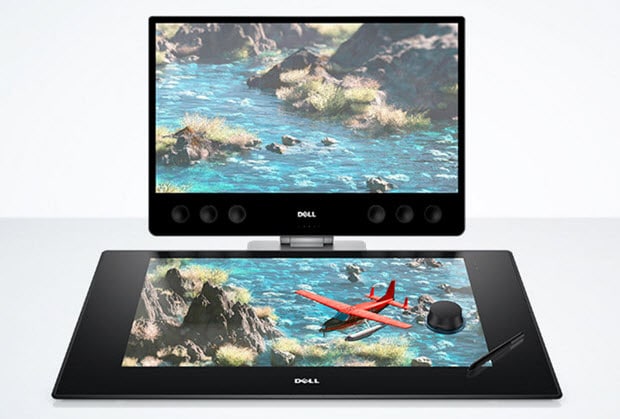 With Microsoft having “better than expected” success with their Surface Studio, it is to be expected that someone will follow with clones.

Has Dell come up with such a model? After all, Dell Canvas does appear very similar, at least on paper.

Here are the key features:

Surface Studio vs Dell Canvas – are they really competitors?

At a quick glance, that appears to be the case. Both the Surface Studio and the Dell Canvas features 27-inch touch screens with similar features. Both can be used with rotation devices like the Dial or the ‘Totem’ named by Dell.

But do they compete in the same segment? In reality, not quite.

Surface Studio is a stand alone computer. You don’t need any other PCs or monitors to use it to its full potential. Dell Canvas, on the other hand, requires a PC (or a laptop). In other words, Dell Canvas is a peripheral (with a display) that connects to computers.

Resolution is not exactly a state of the art either – 2560×1440 (compare this to Studio’s 4500×3000). Perhaps Dell did this to control the cost and also to reduce the CPU/GPU load from the main computer it is connected to.

And this is why there is a huge price discrepancy – Dell Canvas “only” costs $1799 US.

Dell Canvas is designed to be laid down in front of you, just like Wacom tablets. As mentioned before, it requires an external monitor. The built-in device was meant to be used to display controls, rather than the main editing area which belongs to the main display, although I don’t see why you would not be able to use CAD type of application directly on its display.

Still, it sure sounds like a huge Wacom tablet, doesn’t it?

Dell Canvas vs Other devices

Perhaps biggest threats will be felt by the tablet manufacturers. Wacom, as an example, produces a line-up of high-end devices called Cintiq and some of them are currently priced well beyond the cost of the Canvas. In fact, if you take the Cintiq model with the equivalent hardware (27QHD), it will cost you about $1000 more.

The biggest question high-end tablet users will be asking is the quality of the pen. Wacom has been building one of those for many years and they are the best in that segment. Microsoft’s own “N-TRIG” implementation is still considered much inferior to that of Wacom’s in several key areas such as:

I’m not sure what Dell’s implementation uses, but I’m pretty sure Wacom would not have given away their best trade secret to Dell. Dell states they use Wacom’s technology, but even Wacom themselves posses several levels of technology, some good, some not so good.

(UPDATED: Apparently, Dell uses Wacom’s UD EMR – in other words, Wacom allowed Dell to create Dell’s own version of Cintiq 27QHD complete with tilt feature at a discounted price! Perhaps this has something to do with the fact that their EMR patent has expired two years ago…)

Also, to be fair, Microsoft is constantly improving N-TRIG, so this gap may narrow down the road.

Oh yes. Dell “copied” Microsoft in other areas too. The Totem looks similar and functions similar too. When you place the Totem on the screen with the presence of a supported app, it too is capable of popping up context sensitive menus and controls as well.

The other difference is that Dell also ships Canvas with a second smaller knob. Currently, no software supports it, but you can imagine some usage for this smaller Totem-like device in some applications.

Here are both knobs for comparison: 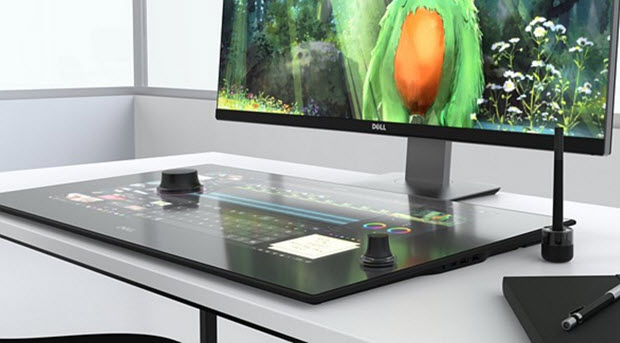 This is definitely possible. The Surface Studio is a fully blown PC so it should be able to support devices like Dell Canvas. Perhaps some people may like to use the two devices side by side.

Not likely. Developing devices such as the Dell Canvas and the Surface Studio takes years. They may have known the existence of each other during the development phase, but it would have been incredibly challenging to copy ideas from each other.

Perhaps the natural evolution from today’s hardware was meant to go towards large touch based devices.

The Dell Canvas will become available in April 2017.

Oh, and the Dell Canvas does NOT work with Macs. Get a Windows 10 based device if you want this. 🙂