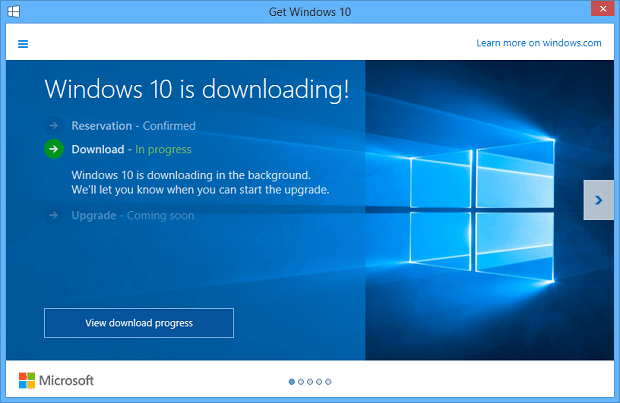 It’s finally here. The official version of Windows 10 is available!

I happened to be lucky enough to get into the first round of updates so, my device will is updating and I thought it would be helpful do do something a bit different today.

I am doing a “live blog” with this post. If you don’t know what that is, basically I am making frequent updates to this post (as opposed to making a bunch of new posts) as I progress through the installation and configuration of Windows 10 on my venerable (but still quite trustworthy) Surface Pro 2, so check back often to see how it’s going for me.

Also, feel free to ask questions about Windows 10 or the upgrade experience and I’ll check it out for you.

As I make updates, they will be placed at the top, so older updates will be pushed down the list as the day progresses. If you want to read them in order, start from the bottom and work your way up. All times will be given in 24-hour format (military time).

This is the end of my ongoing updates to this article. At this point, I’ve successfully installed and configured Windows 10 on my Surface Pro 2. It’s been a fairly long (but fun) morning of exploring Windows 10 and I hope you’ve enjoyed my thoughts as I went through the process.

All in all, I’d say it’s been a pretty successful upgrade. Nothing got lost and most of the issues I did have were just annoyances or user error on my part.

Now, I have to start updating old articles and creating new ones to reflect Windows 10 on Surface tablets.

Good luck with your upgrades…

I though noon would be a good time to stop playing with Windows 10 for a second and summarize the issues I’ve run into so far. I’m happy to say that they’ve been annoyances more than bugs or broken functionality.

All in all, not a bad start. As I said, these are all pretty much just annoyances (though you could argue the offline file issue is more than an annoyance).

Getting Everything Back In Order (11:47)

At this point I’ve been poking and prodding Windows 10 in both desktop and tablet mode for around 5 hours. I’m  finally getting around to rebuilding my start menu and start screen as the layouts were lost during the upgrade (something for you to be aware of – it would be a good idea to take a snapshot or two of your start screen so you can more easily rebuild it). 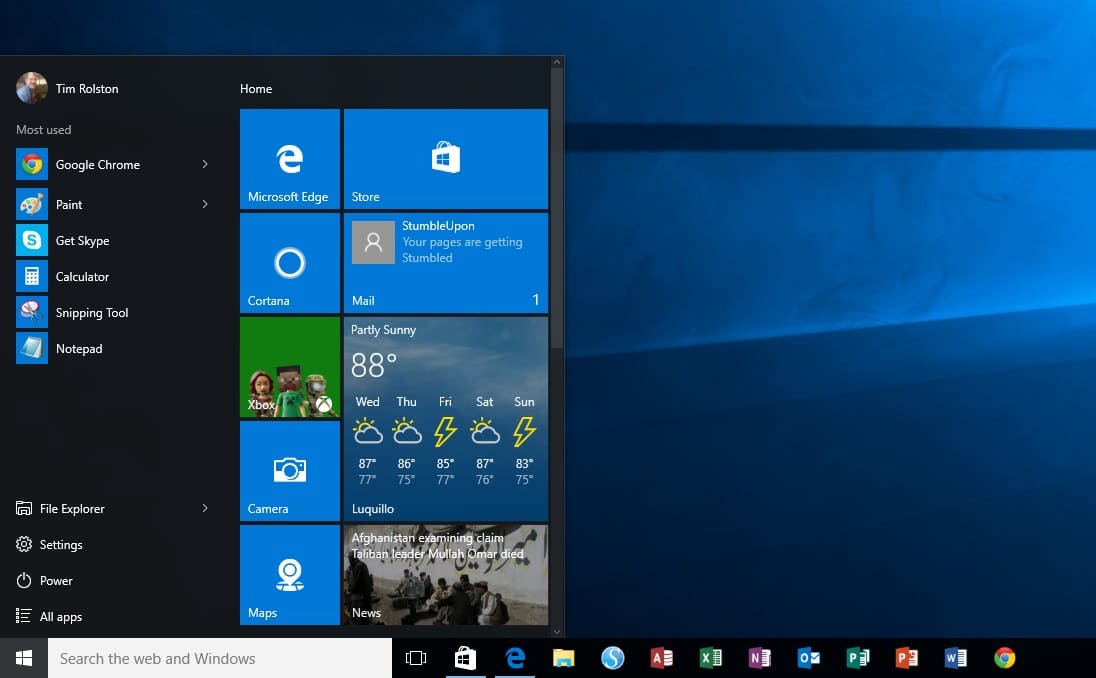 The Windows update download finished. Network is still getting hammered. OneDrive is the culprit. I’m still looking for a way to “nicely” pause the sync as Microsoft has googled away the methods I would have used in Windows 8.1.

Yes, I used “googled” as a verb, it means: to remove features without telling anyone or considering customer input or needs at all. This has been something Google has frequently done in the past and the usage of “googled” as a verb has started to pop up on the internet as a result. 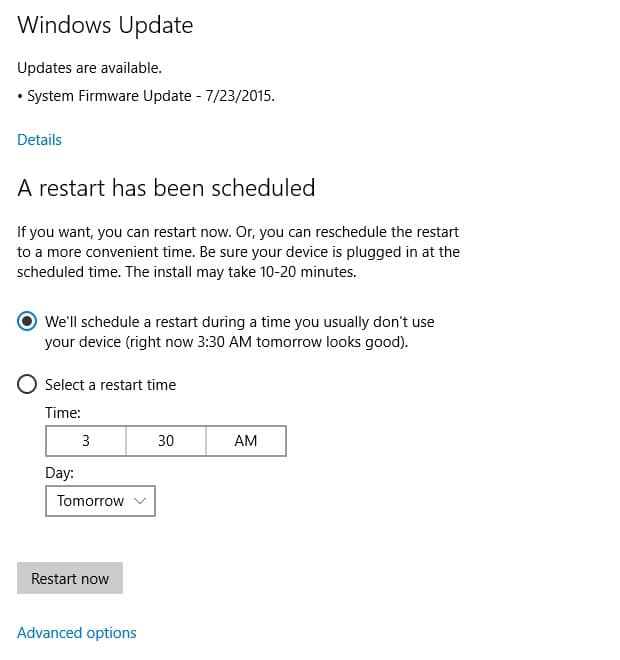 In the meantime, just so I can get some other things done, I’ve killed the OneDrive process to keep it from eating all of my bandwidth. When I’m ready to let it sync, I’ll just restart my Surface.

So, I noticed that my network was getting hammered and after a little poking around, I found a couple of updates that only appeared once Windows 10 was installed. In addition, OneDrive decided to completely re-sync my files. Keep in mind that I had already made sure all of my files were synced to my Surface before the upgrade in an attempt to avoid this very issue.

I expected there to be a hit while OneDrive made sure the files were all there but, instead, it seems to be re-downloading the whole set (and I have 50GB+ of files in OneDrive). 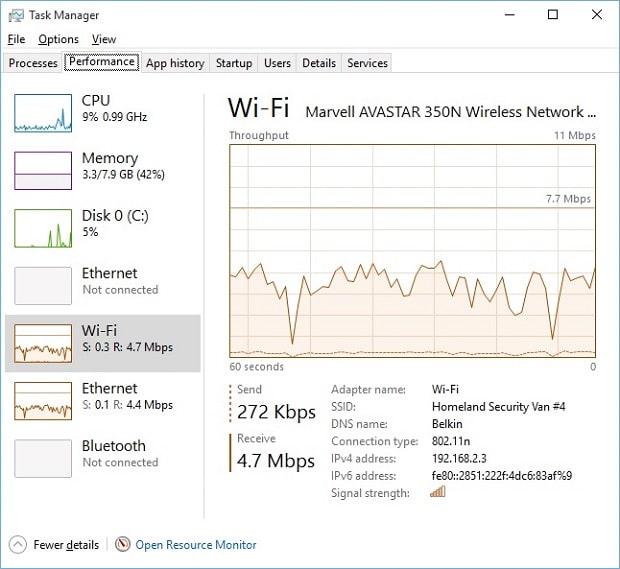 To top it off, I can’t find an option to pause the sync. Grrrr….

OK, after playing with the new versions of Word, Excel, and PowerPoint, it occurred to me that I might want to make sure all of my applications survived the upgrade. They all did but, I noticed that more than one no longer appears on the start menu.

In my case, VyprVPN and Paint.net are missing. Both still work (though I had to reenter my account information for VyprVPN) they just don’t appear on my start menu (including in the “all apps” section).

This is something you’re going to want to make note of during your upgrade.

Putting my Cortana and Continuum issues on hold for a moment, I decided to see what’s up with the mobile version of Word, PowerPoint and Excel that is supposed to come with Windows 10.

At first, I thought the “Get Office” icon that appeared on my desktop would point me at them but, that icon is the same one from Windows 8.1 that gives you a chance to buy Office 365.

Next, I went into the new Windows Store as seen below: 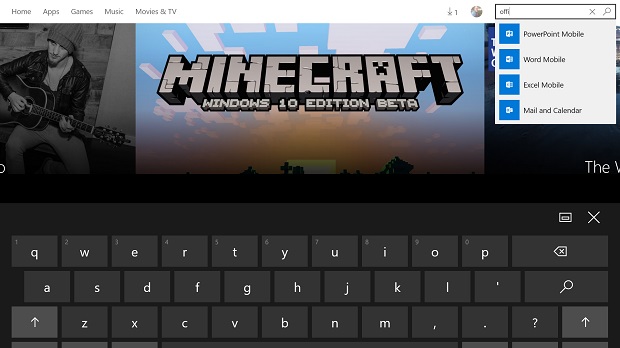 From there, I just searched for “Word Mobile”, “Excel Mobile”, and “PowerPoint Mobile” and installed them one at a time. It was pretty straight-forward and you can see screenshots of all three below: 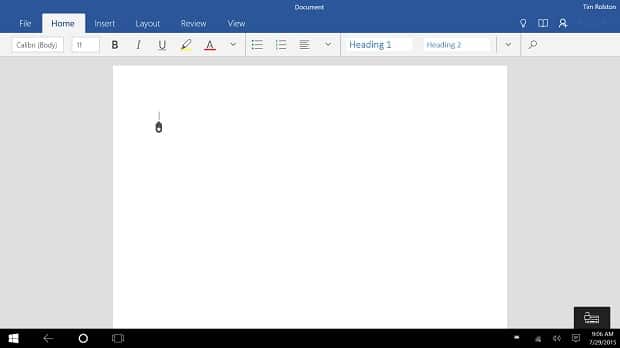 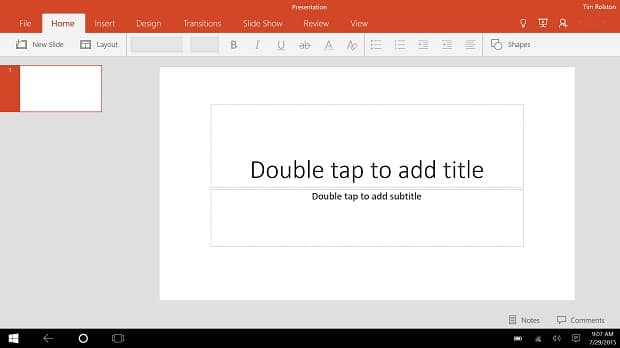 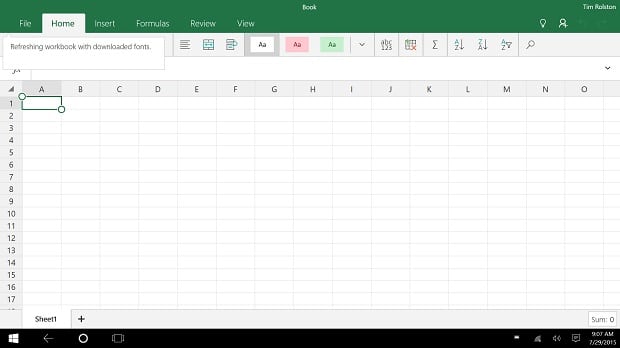 Oh yeah, I see a “Office Mobile on Surface” post being written in my near future.

After getting the Cortana and Continuum features configured properly, I noticed that I’m still having a bit of problems with them both. It turns out that Cortana is doing really well responding to the “Hey Cortana” command but, she doesn’t seem to understand much after that. I’m still trying to figure out why that is before I write up a “how to” on her.

Same goes for the Continuum feature. It simply doesn’t seem to work well despite having it configured correctly. There’s a big thread on Windows 10 installation issues the Surface Subreddit so I’m posting  a question there to see if it’s just me or if others are seeing the same issue.

OK, I had to get some breakfast but, while I was eating, I discovered the first unexpected result with Windows 10 and My Surface Pro 2. It seems Continuum wasn’t set to function out of the box. Same goes for the “Hey Cortana” functionality. I had to go into settings and manually turn them on. 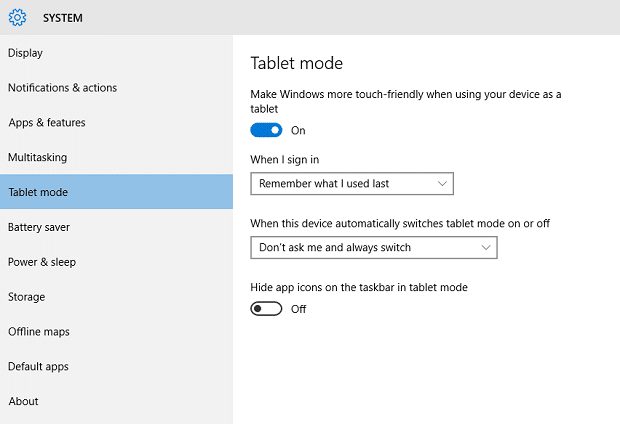 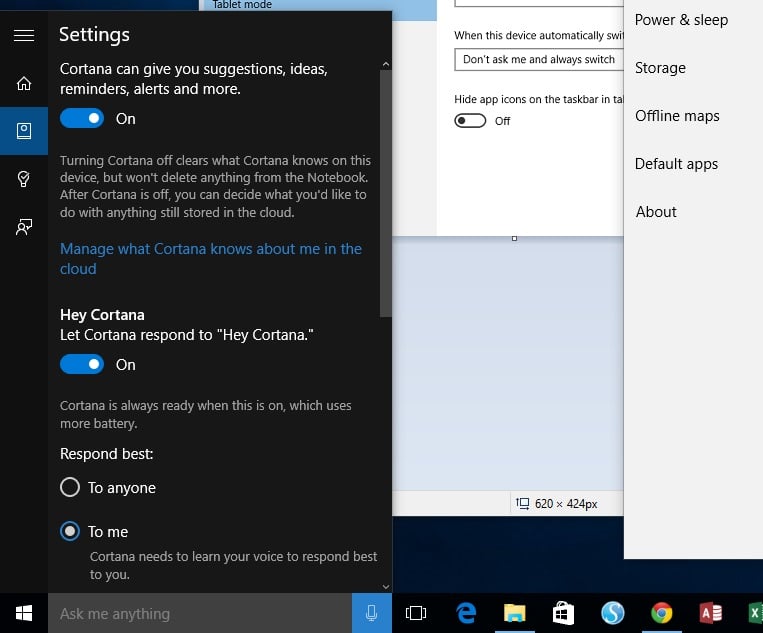 In addition, I chose to “train” Cortana to better understand my voice. I hope she gets better at it. Right now, it’s spotty at best. If you don’t know where these settings are, I’ll be coming up with a post (or posts) on these settings soon as part of a “Getting Started with Windows 10 on Surface” post (and of course, I’ll be updating the downloadable Getting Started guide as well).

It went pretty smoothly, No screenshots yet but, I’ll see if I can get something together soon. As far as it goes, it was a very smooth and easy to follow procedure. You should be able to follow it easily. Below you can see the Start Menu in desktop mode on my SP2. 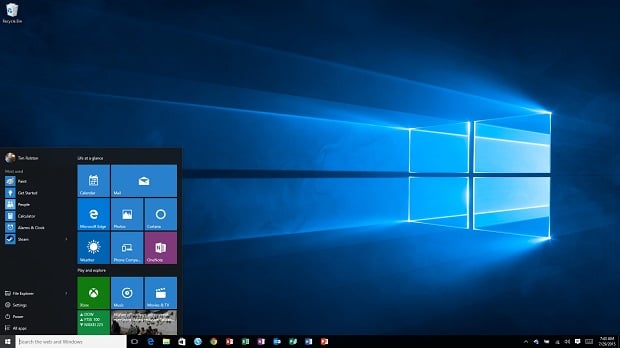 Now, on to getting some things configured and setup… Let’s start with Cortana.

It prepared what it needed to prepare so here I go with the upgrade. If you don’t hear back from me, something went horribly wrong… 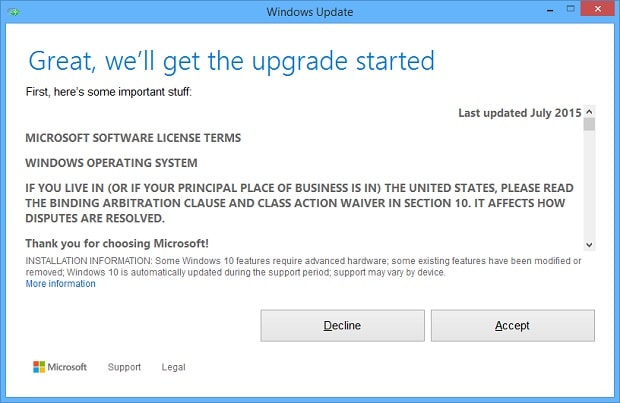 The download finished and now it’s “Preparing for installation….”, whatever that means. 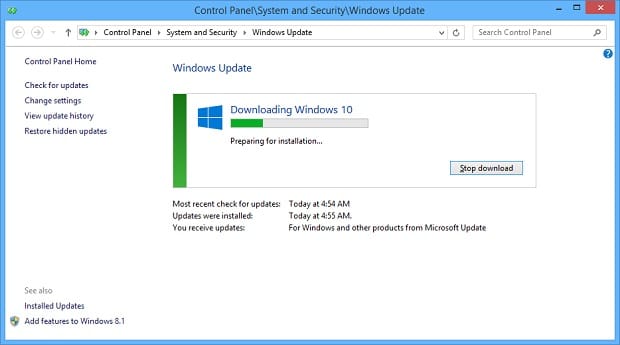 Maybe it’s like going to ludicrous speed? I hope it works out for me better than it did for Dark Helmet….

OK, jokes aside, I know what it’s doing. It’s doing backups and system checks just to make sure everything will be fine. 😉

Still waiting on the files but it’s at 95% done. I need a faster internet connection… 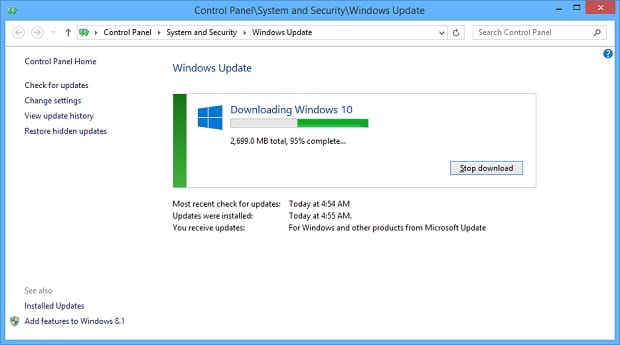 The files are still downloading. It’s just about halfway done. It needed to download 2.7GB of files.

The Installation is Starting (4:40)

Bingo!! The installation just started downloading the files. When I went into the Get Windows 10 app, Here’s what I saw…

From there, I went into Windows update and saw that it was getting ready to do some more downloading… 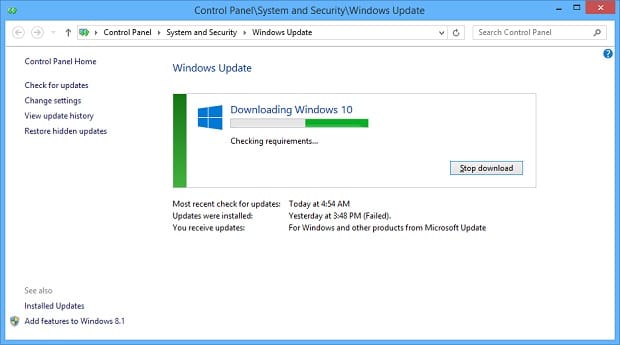 It’s just after midnight and I snuck out of bed to check on my installation progress. Nothing has happened yet. I guess I’ll grab a few more hours of sleep…