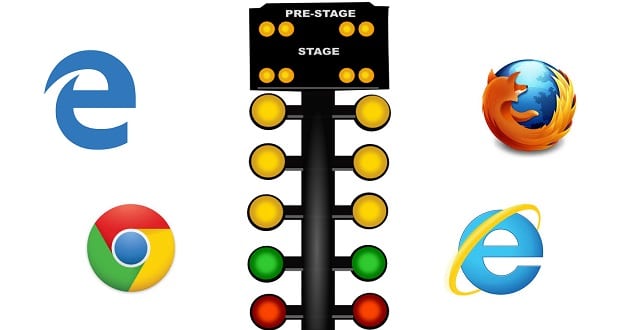 In this article, I’m going to report the results of several comparison benchmark tests I performed on the Edge web browser. The goal is to see how the new Edge browser stacks up against its competition. Along with Edge, I also benchmarked Chrome, Firefox, and Internet Explorer so I could compare them against Microsoft’s newest browser.

This article outlines an objective comparison of the speed and performance of each of the tested browsers.  If you want a subjective evaluation of the Edge browser, you can find my opinions in this article: Edge Browser on Surface – Tim’s Review

OK, on to the benchmark comparison. First up, benchmark testing…

I used three browser benchmarking tools to test the 4 browsers. The tools I chose were Peacekeeper, Jetstream 1.1, and Octane 2.0.

The goal of this test is to measure how Microsoft Edge compares to its competitors when processing/rendering various types of content that might be found on a webpage but does not directly measure how quickly each browser can load a particular webpage (that’s in the next section).

Since CPU power has a significant influence on this type of testing it should be no surprise the Surface Pro 3 scores are higher than the Surface 3 scores across the board.

To help ensure a reliable level of scientific rigor, here is a description of the testing environment/conditions for the benchmark testing:

The graphs below shows the results of the Peacekeeper, JetStream, and Octane benchmark tests for each browser. In all three of these tests, bigger  scores are considered better. 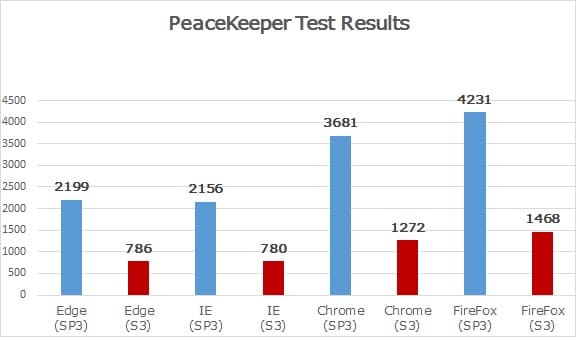 As you can see, Chrome and Firefox significantly outperformed both Edge and Internet Explorer on the Surface Pro 3 (blue) and Surface 3 (red). In addition to having a low benchmark score, Edge was unable to perform 2 of the video rendering tests (using the Theora and WebM codecs) included in the Peacekeeper series.

Internet Explorer was able to complete all of the tests so, in this benchmark at least, Microsoft Edge is not living up to the promise of being a better browser than Internet Explorer. 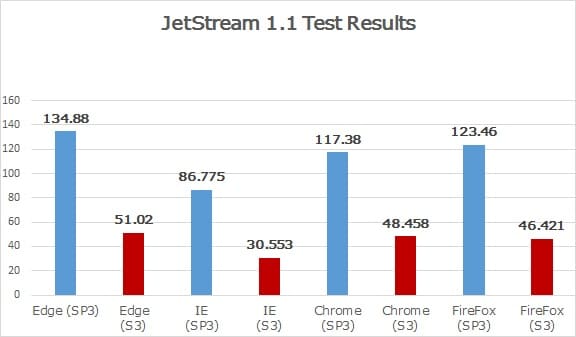 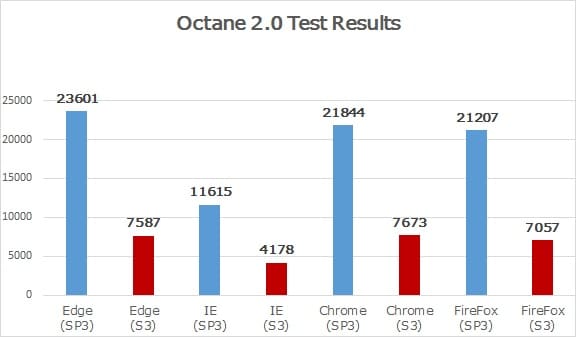 Unlike the Peacemaker tests, with the JetStream and Octane tests Microsoft Edge was very much on par with Chrome and Firefox on both Surface tablets. All three left poor old Internet Explorer way behind.

Let’s face it, when you’re using a browser what you care about is how quickly a page loads, right?

With that in mind, this test is a direct speed comparison of Microsoft Edge versus its competitors when loading a “real” web page. It does not focus on a particular type of content (as in the benchmark tests) but simply measures how quickly a webpage is loaded.

The most significant challenge in this type of testing is separating out delays caused by network speed fluctuation, DNS issues, latency, etc… This is because a momentary slowdown on the network may cause a website to take 3 times as long to load and will skew the measurements of the browser’s performance.

To eliminate network issues as a factor in my testing, I simply created a webpage in WordPress running locally on my Surface. This effectively eliminated the network as a factor, so that I’m only testing the ability of the browser to render a web page. It also has the benefit of making sure every test is loading identical data which increases the accuracy of the tests.

To simplify testing, I only ran the tests on my Surface Pro 3 with the assumption that performance on the Surface 3 would be somewhat slower but, the relative performance of the 4 browsers would be similar.

To help ensure a reliable level of scientific rigor, again, here is a description of the testing environment/conditions for the time trials:

The time trial testing results for the four tested browsers are shown in the graphs below. Since most people visit the same sites on a routine basis, IMHO, the cached performance test is the most relevant “experience measurement” for those users. In addition, it also give some insight into the caching ability of each browser and how it affects performance.

Unlike the benchmark tests, in this test, a lower score is better. 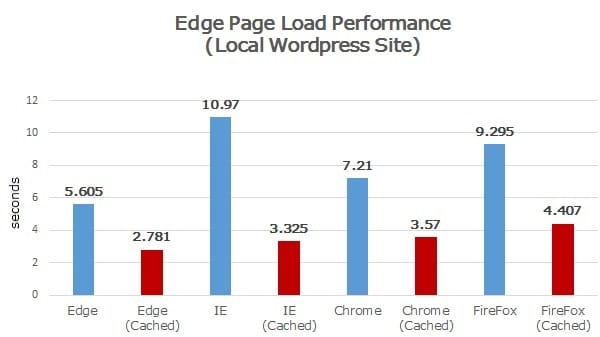 As you can see in this “real world” test, Edge loaded the test page the fastest with the average coming in at less than 3 seconds for cached pages. IE wasn’t far behind for cached pages but, it took IE quite a while (11 seconds) for non-cached page loads. Chrome and Firefox came in somewhere between the two Microsoft browsers.

From the results above, I would say that Microsoft Edge is on par with Chrome (for most things) and it generally outperforms the venerable Internet Explorer. However, I would also say that Internet Explorer has gotten a bit of a bad rap when it comes to actual page loading speed though it did tend to do poorly in the benchmark tests.

Not surprising, really, because browser preference is completely a personal choice, reason doesn’t usually have much to do with it. I would like to remind everyone that for the sake of consistency, I did all the testing in the Windows 10 version of Internet Explorer, perhaps if I did them on Win 8.1 version, the results would be different.