“Imitation is the sincerest [form] of flattery” – Charles Caleb Colton

There have been rumors about Apple’s “iPad Pro” floating around for some time and many people thought Apple pushed back its plans for the device as it tries to give manufacturing partners in China time to meet iPhone 6 Plus demand before starting up a new product.

However, according to a new report from the Japanese website Mac Otakara, it looks like Apple is continuing development on the project and is planning a 3rd quarter 2015 release of what it is (probably) hoping to be a “Surface Killing iPad Pro”.

According to the report, the larger iPad’s design will be similar to the iPad Air 2 but will feature a 310mm (12.2″) display and the device will have speakers and microphones on both the top and bottom edges. Maybe it will support Stereo Audio?

The report also claims the iPad Pro be about 7mm thick which is a bit thinner than the Surface Pro 3 at 9.1mm and a bit thicker than the iPad Air 2 at 6.1mm.

There aren’t any details about weight nor are there any processor/storage specs mentioned. Also, there’s no mention of a USB port or anything resembling the awesome SP3 pen, which I find interesting.

However, the unknown (but they claim reliable) source did mention a few other details such as:

I translated the Japanese portion of the report from the site and quoted it below:

According to reliable sources, iPad Pro of rumors that Apple is in development, Microsoft of Surface Pro 3 and is very similar to the size of, as a rival product, you will be considered to be a product that has the Surface Pro 3 to target. Width and height, but has become a close design to Surface Pro 3, the thickness between the iPhone 6 and iPhone 6 Plus, but will be thicker than the iPad Air 2, it seems thinner than the iPad Air.Design has the iPad Air 2 on the base, but the speakers and microphone, there is also the vertex as well as the bottom, seems to be to allow stereo playback. iSight camera, Lightning connector, such as Touch ID does not change the position of the iPad Air 2, but the processing of the edges, rather than the diamond cut, like the MacBook Air, the new processing the edge part is out than liquid crystal surface seems to have been adopted. The iPad Pro will be released, is expected to’s third quarter around 2015.

The report also includes a hand drawn illustration of unknown origin. The illustration (below), appears to show a row of holes possibly representing a speaker along the top edge next to the power button. 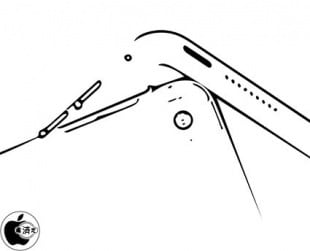 In case you’ve never heard of the site, Mac Otakara has a strong (but not perfect) history of accurate Apple product rumors.

In fact, one of their more recent rumors accurately predicted the arrival of the iPad mini 3 last month along the claim of new Smart Cover and Smart Case color options that turned out to be spot on.

So, what do you think; Is Apple competing or just imitating the Surface Pro 3 hoping to pick up on some it it’s success?