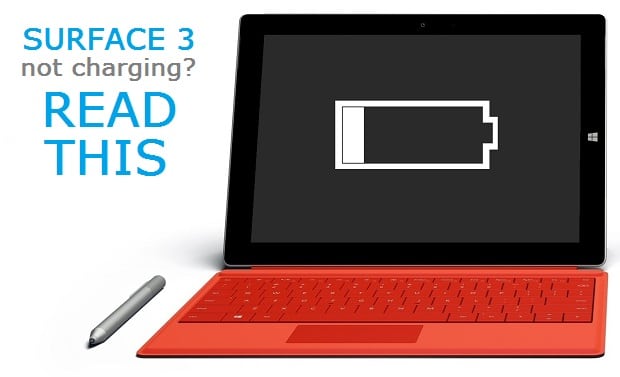 Many Surface 3 owners have noticed times when their Surface 3 is plugged in but not charging even though the light is on. They most often discover that it didn’t charge in one of two ways:

Sigh. Really? The light is on, it even knows that it’s plugged in, so why isn’t it charging? Without any clear answers from Microsoft, we started testing to try and figure out what’s going on.

We started by plugging in the charging adapter then connected the Mini-USB cable to the Surface 3 to see if it would start charging properly or if it would give the “Plugged In, Not Charging” status from the power icon in the system tray.

This test was repeated 50 times over the course of two days. The Surface 3 started the tests fully patched as of 9/24/15 with 63% battery charge and was not used for anything else during the testing. Between each test, we shut down and restarted the computer to make sure it wasn’t a running process causing the problem.

We obtained the following results:

This means that (during our test run) the Surface 3 only started charging correctly when connected to power 42% of the time!!

We hypothesize that the Surface 3’s charging system has a hard time accepting the power coming from the USB port when it’s first connected because of something weird going on with plug and play support. We suspect the underlying cause is a firmware or driver issue which gives us some hope that it will be corrected by Microsoft in the future.

Surface 3 Is Plugged In But Not Charging: Try This Simple Workaround

If you’re like most people, you leave your charger plugged into the wall and connect your Surface via the Mini-USB cable. Turns out, that may perpetuate the problem.

We discovered (after another series of 25 tests) that if you connect the Surface to the Mini-USB cable FIRST then plug the power adapter into the wall, the Surface 3 starts charging 100% of the time (per our testing). As a bonus, you kill an Energy Vampire at the same time.

We also discovered that if you forget and connect the Mini-USB cable while the power adapter is plugged in, simply unplugging the power adapter and plugging it back in will also cause your Surface to start charging normally.

Based on this, we suspect that having the Mini-USB cable plugged into the Surface 3 first gives plug and play a few moments to figure out that it’s the power adapter before the power starts flowing so it can be ready for it.

While we can’t guarantee this workaround will work in your case, it just might. If it does, your Surface will be charged when you need it. Besides, it’s easy so what are you out trying?