In this post I will be talking about using a VPN on your Surface Pro (Pro, Pro 2, or Pro 3) or Surface 3 tablet.

I’ll be covering this technology because, in the past, both Windows and Internet Explorer had some serious issues with security and, as a result, were often compromised. Microsoft has made some impressive steps in making both Windows and IE more secure (though it’s not perfect) but the reputation for Microsoft software being inherently insecure has persisted.

And so, even computer novices are often concerned about security when using a Windows based computer like the Surface Pro and the question “is my Surface secure?” often seems to come up when someone starts using a Surface for the first time.

The short answer is: “For the most part, YES. However, nothing is perfect so you still have to be smart. Load anti-virus software, keep the firewall on, don’t click on suspicious attachments or web popups, and for goodness sake keep your Surface patches up to date.”

However, even if you do all of that, it is still possible for someone to “listen in” on your network traffic on unknown and public WiFi networks. If someone pulls that off, they could do all kinds of nefarious things, like intercept passwords or read your private email.

The good news is that you can use a VPN to help secure your network traffic no matter whose network you’re using.

VPN for Surface Pro: What is a VPN?

In case you don’t know, a VPN (or Virtual Private Network) is a program you install on your Surface that sets up an encrypted connection (often referred to as a “tunnel”) between your computer and the VPN server.

After the tunnel is setup, all of your network traffic is encrypted and sent to the VPN server. From there, your internet traffic “hops off” and accesses the internet normally (except, to web servers you access, it looks like it is coming from the VPN servers.)

When you’re receiving data, the process works in reverse with the VPN server encrypting the data and sending it through the tunnel to your Surface where it is unencrypted and read normally at the destination.

There is another side benefit to using a VPN besides security. It will often allow you to access blocked sites from behind a corporate firewall. For example, if your company blocks Facebook, you might be able to use a VPN connection to “tunnel” around the corporate firewall and play Farmville until your heart’s content – kidding of course.

Now that I’ve covered what a VPN is and why you might want one. I’m going to give you a recommendation for my favorite VPN – VyprVPN.

VyprVPN is my favorite VPN for Surface Pro tablets because of the following 4 reasons:

In addition, VyprVPN offers some really useful features such as:

If you decide to give it a shot, installing VyprVPN is relatively straight forward. The only real gotcha is that you have to be using a Surface Pro, Surface Pro 2, or Surface Pro 3 and have administrative rights.

You can get signed up for your free trial to see if you like it by going to this link with your web browser: VyprVPN Trial Signup – you can also get 50% off the first month there.

After you have your trial account, you can go to this link to download the software: VyprVPN Installation package

Be sure to avoid procrastination when you start your trial as you have to provide your payment information to start the trial and if you don’t cancel it before the 3 days are up, you will get charged you for a subscription. 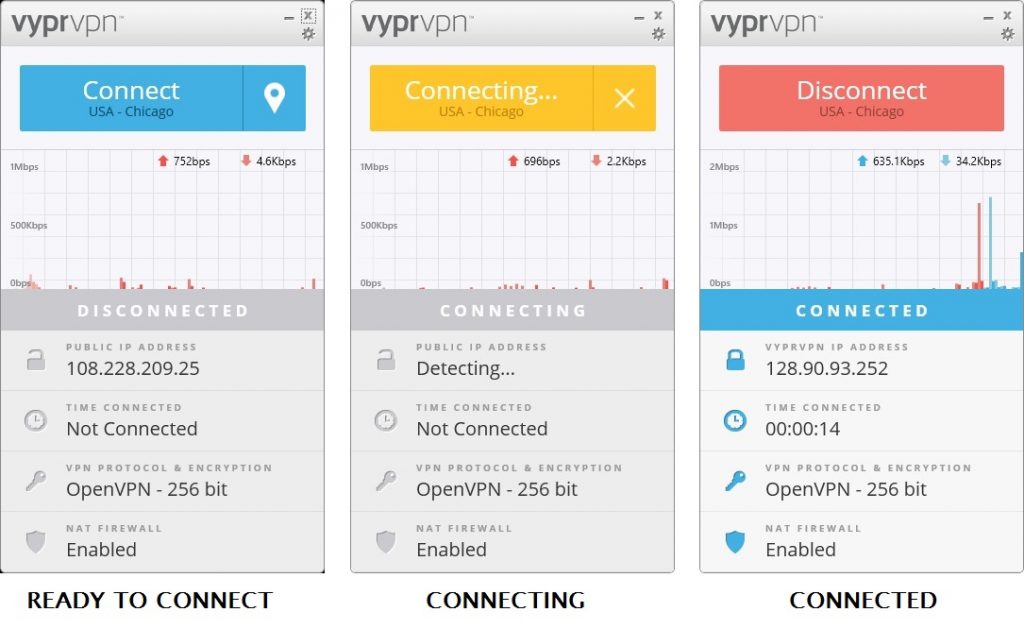 It doesn’t get much more simple than that. If you look at the above screenshots, you’ll notice that the traffic graph goes from red to blue to indicate that your data is being sent over the VPN connection.

The VyprVPN icon looks like the one circled in the picture to the right. Just tap or click on it to get to the options menu.

From there, you can do pretty much anything you can do from the full interface, except access the options window. You will probably not need to mess with the options for VyprVPN as the defaults are pretty solid. However, if you want to get into some of the advanced features, just click on the gear icon ( illustrated to the left), then select Options to bring up the options window.

Here you can set several options, like setting it to connect on start up, configuring it to auto connect when you are on a unknown WiFi networks, and even pick the protocol it uses to encrypt your network traffic. Bottom line:
If you want to make sure that your connection is secure, especially if you move around public networks a lot, then you will want to use a VPN. The VyprVPN product is solid, easy to use, and provides extra privacy. I use it all the time and I recommend it to others. Incidentally, in case you care, VyprVPN also works on Mac, Android, Linux and iOS devices.

Hopefully, you now have a good understanding of what a VPN is and how it can help you keep your data safe.